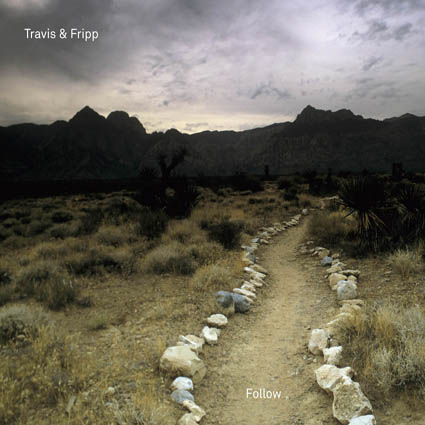 Over thirty years ago, King Crimson founder and accomplished guitarist Robert Fripp introduced his ambient style of music with the tape loop-driven Frippertronics, and then for nearly the past quarter century, with his Soundscapes recordings. In 2008 he teamed with saxophonist/flautist Theo Travis who also developed his own soundscaping system called Ambitronics. Travis reigns from the Soft Machine Legacy and, more recently he has worked with Steven Wilson.  Since teaming up over five years ago,  there's been considerable growth since the duo's 2008 debut, Thread.

Recorded, for the first time, with surround sound in mind—thanks to engineer Steven Wilson's involvement, "Follow" has plenty of the trance-inducing loop driven hypnotics that made their first two duo releases so captivating.  Sitting in the sweet spot washes the listener with rolling sounds and gentle melodies.  Slow and subtle shifts draw the listeners ear from one corner of the room to the other as the music melts from one passage to the next.  Yet, there never feels like there are any holes in the surround mix, and all five channels are used fully without putting the listener off balance, while still craftily drawing their attention to any given corner when needed.  For fans of ambient music, the surround mix is a wonderful use of the soundstage and exceeds this reviewers expectations for a five star ambient surround mix.

Stepping away from the ambient model, "Hear Our Voices" is an engaging beautiful Travis composition, a classically influenced piece for multi-tracked flutes and reeds that melds into "1979" which, sends the listener on a soothing journey with Travis' Ambitronics layered over a Frippertronics recording from that year.

The biggest surprise is the final track, "So There," which features Fripp playing an incredibly raw guitar solo, along-side layered horns and a relentless tambourine and foot-stomp, Just at the moment when the listener has drifted into another dimension, Fripp and Travis prove that they can really rock and shake the walls.