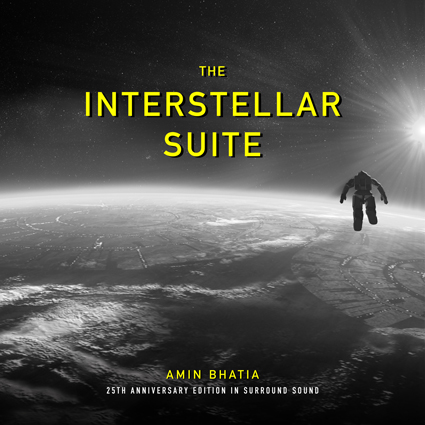 Remixed by award-winning producer/engineer Frank Morrone, the Interstellar Suite has attained cult status in both electronic and progressive rock music circles since its release in 1987. Bhatia has taken electronic synth orchestration to another level, going far beyond similar artists like Synergy, Wendy Carlos, Klaus Schulze, Tomita, or other similar albums up to that point.

After winning the Roland International Tape Contest with a piece he had created on just a Minimoog and a four track tape machine,  Bhatia was asked to work on the upcoming Toto album, Fahrenheit. During this period, Capitol Records was in the process of founding their Capitol/Cinema division, and based on his growing reputation as a composer of cinematic soundscapes, he was signed as one of the four synth artists who would launch the specialty label. The Interstellar Suite and its nine movements, which were originally created as his demo reel from stories he created in his head and then articulated through music, were released. However, the Capitol/Cinema division was short-lived and The Interstellar Suite was released only on vinyl, skipping the radically growing CD market at that time.

What separates Bhatia from similar artists is his choice not to use digitally-recorded samples of any instruments out of respect for "real" musicians and orchestras. Instead all the sounds and textures were created with a synthesizer, commonly the Minimoog, all without touch sensitivity. Incredibly all the dynamics were created manually with a fader and sequenced on a Roland MC-500, with only 16 MIDI channels.

I had a chance to ask Bhatia a few questions about Interstellar Suite.

Q:  I am very impressed by the dynamic range and silent noise floor of the surround mix.  Were any noise reduction tools employed to strip any hiss from the analog multi tracks?

Bhatia: "No the only noise reduction method was using the "strip silence" feature in Pro Tools so that any areas of tracks that weren't playing anything are totally silent. Credit is also due to producer/engineer Dan Lowe who took great care in maximizing the gain structure when recording these tracks to analog tape originally back in 1986. We used AGFA tape at a high flux level so the multi-tracks themselves have great signal to noise ratio."

With some further thought Bhatia continued: "On second thought, there was some noise reduction used on a couple of solo tracks for Interstellar Suite. The odd French horn solo or dialogue line had a little bit of give-away tape hiss which producer Frank Morrone was able to clean up using some plugins from iZotope as well as using his, oh yeah, his amazing ear."

Q:  "With the use of reverb over a 360 degree  space, how do you feel this texturally changed the piece from its original stereo release?"

Bhatia: "This was a big part of the new mix and in my opinion the only way to use reverb in surround. There's a known quick method where one uses two stereo reverb units to create some sort of delay between front and back but that was driving me crazy. We finally found a plug in from Avid called Revibe which has a 5-point tap so that any sound from any source has 5 distinct but inter-related reverbs. For surround I think this is the best way because I think not enough care is given to the relationship of the side speakers. For example Left and Left Surround should have a distinct stereo field between them but many surround releases currently have that "wall of mono" on the sides."

Q:  "Did you find using Pro Tools allowed you to become more precise in placement and movement of effects and instruments while creating the surround mix?"

Bhatia: "Very much so. The approach we used was to first ensure a musical balance that worked, and then we sub-mixed to 4 six channel stems: music, reverb, SFX and flanging. (The flanging stem was the old fashioned vari-speeded copy of the original program which we just faded in and out against the original to create and steer the flanging effects (just like the old days.) After that we manipulated the stems using Iosono's Anymix as well as Avid's internal plugins. The music was to be very concert hall and orchestral but the sound effects and flanging could go nuts around the room. But again we could quickly fix that if we thought we'd gone to far on listening back the next morning. And even at mastering we could adjust the balance of dry to wet and the treatment of SFX versus the music. Frank Morrone and I always envisioned the dynamics as more of a film mix than an album mix so every now and then you get those extra decibels of SFX you never expected."

Q:  "If you had the opportunity to record it all over again, would you wish for more than 24 tracks?"

Bhatia: "Maybe a few more tracks sure but not a lot more. Todays systems with hundreds of tracks have never appealed to me. I'm very much a fan of premixing my instrument groups and layers and making decisions early in the writing and mixing process so that the final mix is a finishing process, not a "try and find something good" approach."

He continues: "Apologies if I'm sounding a bit sarcastic but part of returning to Interstellar Suite was to revisit the idea of linear recording and linear decision making. We have far too many options today and I want to find someway to return to the more pre-planned ways of music making and recording. I'm certainly not against overdubs or technology or digital, but today it's far too easy to go into a studio without a goal and just mess around. How do we get back to linear decision making and recording? That's the key."

Q: "Had you already been a fan of surround sound recordings when asked by your fans to remix Interstellar Suite in 5.1?"

Bhatia: "Yes, I've been a fan of both dynamics and spatial mixes for years. I have many DVD Audio DTS and SACD recordings and love to immerse myself into a piece of music with the lights off and a favorite consumption."

Q:  "Are there additional pieces that you have written or would like to write specifically to be mixed in an immersive surround sound version?"

Bhatia: "Actually my sequel album Virtuality has many pieces already mixed in surround. I'll revisit some of them but others are good to go. But first we'll see how Interstellar pans out (pun intended.) We've only just started on the surround downloads and are looking forward to the Pure Audio Blu-ray format."

In addition to Bhatia's responses above, the Interstellar Suite includes a booklet containing elaborate details of the composition, recording and mixing of the nine pieces.  While I don't have the original vinyl record to compare against the new mixes, I downloaded both the stereo and surround files each with their unique characteristics.  As one would expect, the stereo mix is a powerful wall of sound coming at the listener, much like watching an orchestra in a concert hall.  There are primarily two schools of thought for creating surround mixes, the first mimics the concert hall setting by placing the music in the front channels, and using the rear channels for ambience, essentially to recreate the acoustics of the space.   The second method, which I personally prefer, immerses the listener in a 360 degree surround with the musicians spread across the sound field.  However, Bhatia and Morrone chose to use a style which combines both methods, and fits extremely well with the cinematic theme of the music.  The surround mix places the synthesized orchestral instruments up front, in a traditional concert hall environment.  To add depth they placed choral lines in the rear channels as if from a choir loft. Much like a movie soundtrack, they spun sound effects around the surround space, and with the use of multi-channel reverb enhanced the ambient space with dramatic effect.  Thus, the stereo mix, while powerful, lacks the depth and spacious ambience found on the 5.1 version.

Listening to the 5.1 version, as Interstellar Suite begins, an impressive fireball emanates from the rear channels, rapidly moving to the front and crescendos  in the center channel.  The orchestra begins the theme with horns seemingly blowing from the top of a mountain and echoing across a valley into the rear channels.   There is a rich bass note throbbing from the center and subs which defines the lows and pushes the piece along.

Dynamics are extraordinary, with a range of about 90db.  Unlike popular music, and even many progressive albums, Interstellar Suite takes advantage of dynamics found commonly in classical compositions.   These extremes lend very well to the excitement of the Suite, riveting the listener to their seat, instead of lulling them to sleep.    The third track "Launch" is an amazing example of these dynamics, from the thunderous locking sound of latches, to the liftoff itself, this piece provides the aural imagery of launching into space.  What ensues after liftoff is a speedy piece of orchestration with embellishments rising from the rear channels, and effects swirling left to right and even penetrating the listener with movement from the back to the front channels.

It is likely to be "hostility" that will become any surround sound enthusiasts pick.  Not only does this piece once again exhibit the incredible dynamic range, it also incorporates an awesome use of the 5.1 channels in surround sound.  As the piece quietly begins with the discovery of a hostile ship, this is an example of where I found the silence and lack of tape hiss to be astounding, considering it was originally recorded on analog tape, which often has traces of tape noise.  As the piece builds, secondary instrumentation responds from the rear channels, and the orchestral parts from the front slowly build in volume.  The final shots are scattered across the soundstage, with jets zipping across the back from right to left.

"Rescue Fleet" continues in a similar line, with jets flying in from the rear and crossing through to the front channels.  Towering horns are delayed into the rears with a depth wide enough to spread across the distance of space.    As Interstellar Suite nears its end, the "Finale" re-introduces the theme, and wraps up the Suite, as if the credits were rolling on a film.  I have long since forgotten that all these instruments are synthesized, and other than a crash cymbal, there is no part that is from an actual orchestra.   Interstellar Suite is not only an incredible surround sound journey, but an amazing use of electronic keyboards that create a vibrant piece of music that tells an engaging story.

This is a must have for an audiophile 5.1 surround sound enthusiast, along with required listening for any fan of cinematic pieces.