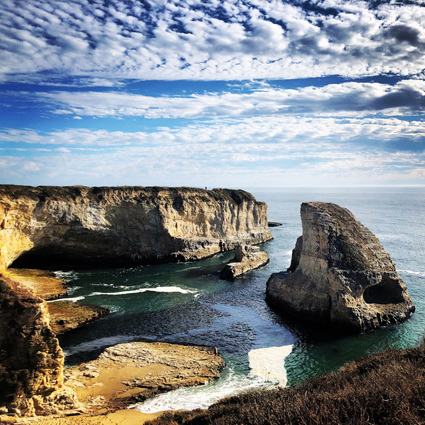 Since his preceding album “elements,” Franck Martin has wanted to explore the world of quadraphonic, which falls into the core focus here at Hi-Res Edition. When he was invited to perform at MusicLandria in Sacramento, he pulled out his recently purchased WMD mixer, mounting it on his modular Synthesizer connected to the ToppoBrillo mixer - and voila he had four channels! More toys were deployed, with the addition of a quadraphonic panning module, the Koma Elektronik Poltergeist module, he was able to modify the Intellijel 1U stereo out with a headphones out modules. This created four channels across two headphone outputs that were in turn connected to a digital field recorder.

Now, with the technology enabled, Martin went on to develop his electronic music, broken into six tracks to accommodate the modern streaming services model. However, while segmented into multiple parts, the Symphoney album is effectively one long piece based on the same patches, with variations in theme, tempo, and voices, much like the movements of a symphony.

Although designed as a quadrophonic experience, the digital download and streaming files are stereo, but mastered for binaural listening. These stereo 48kHz / 24-bit Wave or FLAC download files through BandCamp are best experienced through headphones, as they takes into account the location of the sound sources, making use of phase, panning and volume to mimic the placement of a microphone in each of your ear, which effectively creates a 3D aural soundscape.

Naturally, it is the discrete quadrophonic version that is of greatest interest here. Using the standard 5.1 surround movie format. Martin added videos that he shot during a trip to Fiji. While the actual mix is still quadrophonic, listeners can pick up the DVD which contains DTS 48kHz / 24-bit 5.1 surround audio with a silent center and sub-woofer channels, which in turn mimic the core four quad channels. The DVD is also bundled with a CD of his earlier album “Elements.”

While Martins synthesizer based music leans closer to Avant guard than to the new age sound of electronic or dance beat grooves of electronica, the aural experience is extremely well implemented. Part I rolls in with sonic waves sweeping across the from to the back channels followed by heavy bursts staggering from the back left to right speakers. Listeners initially feel over weighted to their backside, but this soon lifts as the front speakers fire with counterpart bursts. It is so easy to hear that quadraphonic is very much alive on Symphoney!

While the opening track is flung to all four channels, leaving the remaining space empty, Part II fills these spaces nicely with the addition of elements that playfully move around the space. From the time keeping cymbal that floats across the front speakers to the buzzy synth that snaps out from the left front channel in a triangular shape heading to the back left and simmering into the front right channel. Throbbing tones bubble across the back channels as the eerie sounds percolate around the soundscape. Although the patterns are meditative, the musical substance takes listeners into a darker place that stimulates the mind.

I can hear a tinge of the early Tangerine Dream albums Alpha Centauri and Zeit lurking in the midst of Martin’s six part Symphoney piece. For those who have attended noise symposiums, this work would be well received by their fans. The dissonance and order are diametric opposites that expand the aural experience to the point where the spatial placement aids in anchoring the pieces.

Sonically these recordings are particularly good, and dynamics are fantastic. Channel separation works very well, and Martin adds some depth to extend the space out a bit further. I was offered a download edition for review, thus can not speak about the video footage. But I am certain that considering the level of detail paid to the quadrophonic mix, those seeking eye candy while falling into the mesmerizing fog of Symphoney will likely find it to be of high quality.

I would be remiss if I skipped over the stereo edition, which is free to download from his BandCamp page. Remember these are binaural stereo files, and sure you could get the MP3 or other lossy codecs, but the Wave and FLAC files are lossless, which obviously should be the preferred format for high resolution audio listeners. I rather like the musically unified stereo edition, which seems to have a wider channel separation over the surround edition. While I miss the immersion aspect of the quad version, I believe that stereo audiophiles will find this edition to be extremely good. I then pulled out the AKG headphones that I rarely use, and melded into the binaural experience. However, while this may come across very differently for you, I effectively only heard a very wide stereo mix with literally nothing forward or behind me. As enjoyable as it is to dip into headphone listening, it is absolutely not my first choice. I much prefer the openness of a speaker system in a room, and furthermore the quad experience.

I certainly recommend picking up the DVD for the quadrophonic immersion listening experience. This is an excellent release for electronic music fans, and those who enjoy Avant guard music tapestries. Martin’s stereo edition of Symphoney is available as a name your price download, which is perfect for previewing the album. I find myself drawn further in with each listen, and am enthralled by the aural picture that is painted across the six parts.