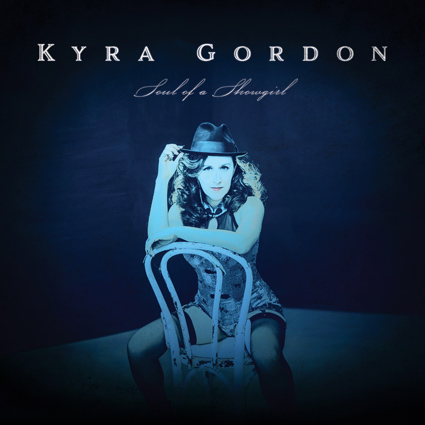 What happens when the journey of a young musician has led them from Hollywood to New Orleans to a rural North Carolina commune and onward to Paris? This is the long road that Kyra Gordon took as she belted out Janis Joplin hits in a one-woman show, earned a conservatory degree interpreting jazz standards, and spent several years in the improvisational hip-hop group ‘The Freeze’ that has fueled her outstanding debut album “Soul of a Showgirl.”

Throughout the album the music flows with stories of her footloose life as the Berkeley vocalist, songwriter and pianist vividly expands on insights she has gleaned along the way. What immediately struck me is Gordon’s rich, multi-hued voice that is filled with luscious dynamics and passion. Soul of A Showgirl is Gordon’s first album featuring her own original material, introducing her as a songwriter with an outsized gift for setting emotional lyrics to well-crafted melodic hooks.

Evoking the sound of high energy rockers before her such as John Cougar Mellencamp and Tom Petty Gordon blasts in at the start on “I Love You,” followed by a set of tunes that goes beyond americana, stretching into country, folk, blues, and ballots. Her sensitive and distinct vocals carry the songs over top her well-arranged piano alongside the accompanying bass, drums, and guitars.

Turning to a folk and country blend she gently strolls across the piano while angelically singing “Doppelganger Angel.” Drums have been placed close to the front of the soundstage while vocals float spiritually across the stereo field. Gordon has an Iris DeMent and Shawn Colvin crossover blend to her vocals that warmly provides a sense of being at home while listening. For me, this song brings in the feeling of someone watching over me and being a part of my life.

The third track “Emotional Pirate” offers a depth of field with the piano and vocals bathed in reverberation delivering distance in the mix. I sense the uncertainty and hesitation of the story from Hell’s Kitchen as the rich base holds down the bottom. There is a wonderful loose snap of the snare that fills in nicely as guitars arpeggiate further off in the distance. Gordon organizes her songs expertly into a format customary in the early days of rock with verses, choruses, and a bridge on this folk infused piece.

The country girl comes out on “Big City Lights” with a country-blues shuffle as Gordon describes heading off to those big city lights. Hitting it hard on this tune, the band is on fire with jangly guitars and punchy drums. Gordon’s vocals soar as she belts out and repeats the lyrics to emphasize the story, arranging the song with multiple bridges that continue to engage and excite the listening experience. These finishing details of her extraordinary stylistic writing make this one of the finest songs on the album.

I am comforted by the air of melodic familiarity across the various songs, which particularly struck me on the “Bravest One” with its folk style gentle musicianship that flows across the stereo field. The nuance of Gordon’s vocals brings out the ethereal connection that is embellished by the organ. I can really feel her wrapping her arms caringly around the bravest one.

“Laredo Slim” is performed in waltz time with a hint of traditional folk blended into the Americana country style. I especially am enthralled with the openness of the acoustic upright base plus the spaciousness given to the guitars and keyboards that spread from left to right. What makes this entire piece for me is the background vocals that harmonize so well with Gordon’s lead. There is a real looseness to the song that allows one to gently sway while being carried forward.

“Who the Hell Does She Think She Is?” really grabs listeners with an insistent rhythmic beat and crunchy guitar work. Dynamics are elevated from gentle side stick hits on the rim of the snare up to heavy hitting drums, along with an organ part that fiercely sits under zesty guitar licks while Gordon’s vocals rise over top the band. One can easily feel the tension describe so vividly in the lyrics and accentuated by the edgy guitar licks.

The album ends with a beautiful ballot titled “Tender Hearts.” Featuring Gordon’s acoustic piano playing and lovely vocals that opens up into the full band embellishing the peace. The subtleties of the piano are reflective of a very natural sound heard on these recordings, giving an overall sense of being present with the group.

From the start to finish Soul of a Showgirl is a remarkable album that I strongly recommend for fans of Americana, country, and folk fans. It is a very well recorded and delicately produced album that is a delight to listen to.