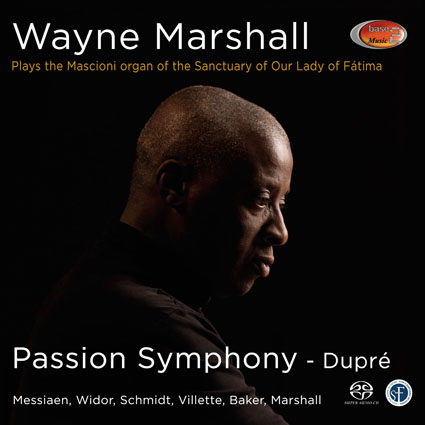 Following the spiritual path of composer Marcel Dupré who wrote Passion Symphony (aka Symphonie-Passion, Opus 23) English organist and composer Wayne Marshall used this as the template for his latest release on Base2Music. Focusing on how the late 19th century French organ tradition evolved, Marshall has now preserved this tradition with painstaking reverence with his own artistry on this new 5.1 surround recording produce by Jake Purches. Performed on the new Mascioni organ which was Inaugurated in 2016 inside the Sanctuary of Our Lady of Fátima, Portugal. This fabulous instrument has everything that invites inspired artists to explore the sacred side of organ music, and the room offers an immense acoustic space that compliments the large sound of the organ.

I learned from the extensive liner notes that the history of the organ dates back more than 150 years, when new instruments in France and America, among other places around the world transformed an older European practice, giving it a much larger and enticing perspective. Often inspired to enhance religious ecstasy and meditation, the new advancements in technology allowed these new instruments to become more versatile, creating a new universe of sounds and techniques. A significant improvements that dazzled audiences with increased decibel levels, carefully regulated with a foot pedal that could create gradual crescendos never before accomplished on a keyboard instrument.

The organ found its way into popular culture when John Wanamaker, the department store owner and builder of breathtaking skyscrapers added some of the world’s largest organs into his stores. It was there that the layman would experience grand concerts such as at his Philadelphia 12-storey department store that opened in 1910.

Purches selected the venue by chance due to unforeseen circumstances, and this serendipitous decision turned out to be an awe-inspiring space with incredible acoustic. The fabulous Mascioni organ offers a wide dynamic range, and the ambient decay in the building is an astonishing 12-seconds. As one sits down and listens, they will immediately notice that the recording is beautifully subtle and bears a quiet and powerful foundation. The album was completed over three consecutive evenings. With the first focused on setup and making test recordings, followed by the actual recording on the following two evenings.

Available on Hybrid Multi-Channel 5.1 SACD or as a high quality FLAC download in your choice of 192kHz / 24-bit or 96kHz /24-bit 5.1 versions as well as stereo high resolution files in the same two sampling rates and bit depth, I am reviewing the FLAC 192kHz / 24-bit version here. I was immediately impressed by the immersive and open feel heard on the recording, wherein I truly felt that I was sitting in one of the pews which lifted me into the meditative and spiritual world. I learned that the main instrument is placed on the west wall of the Basilica. Then there are echo divisions enclosed in two separate swell boxes placed on either side of the galleries some 20 meters in front. Meanwhile, the echo organs can be heard in the rear speakers which is where the enveloping sensation is conveyed. This kind of setup likely creates a real challenge for most recording engineers, yet Purches has masterfully placed the Sennheiser MKH8020 microphones in exactly the right spot to obtain the best tonal balance, capturing every nuance into the digital world at a ruler flat response from 10Hz to 50kHz.

Purches also notes that these pieces were recorded in true surround-sound 5.1 and suggests listening on a system where all channels are full range, which I also advocate. Quad fans will also like that although the sub-woofer is active from 16 Hz to 50 Hz, this recording can easily be enjoyed without a sub, provided that the loudspeakers have sufficient low frequency response. Although I did not test it, these tracks can also be listened to in ‘quad’ if no center channel is present.

The album opens intensely with “Transports de joie” griding deeply in the lowest of regions, while the upper regions tickle explosively with massive energy echoing across from the front to the rear channels. The ginormous room slowly decays all around the sweet spot as I find myself transported directly to the space, sitting in one of the pews completely immersed by every tone. Playful gentle keyboard arpeggiations can be heard from the left front channel with exulting elongated tones pierce in from the front center. There is a massive amount of depth falling further into the front channels enhanced by the responsive parts echoing from the rears. The dynamics are incredible, keeping listeners engaged with a magnificent aural delight.

The subtleties between passages are so well defined, conveying great detail on this high resolution release. Entering into the album’s core piece, Passion symphony, Part 1 titled “Le monde dans l'attente du Sauveur” certainly bears itself to the listener, boasting a more melodic gentle feel that has been born out of the nearly chaotic sections. Here is where hi-res audio shines through again, exciting the ear with an enticing difference from the quietest to the loudest parts wherein the piece crescendos and quickly falls into mere silence.

“Part 2, Nativity” has an air of classical familiarity featuring intertwined counterpart that softly fill at the bottom layered by chords and melodies occupying the midrange and top octaves. The openness and transparency are phenomenal, including the overall sound clarity which absolutely delivers the real life feeling of sitting in the vast church listening to the music while it is performed. Do not expect any channel movement, nor swirling surround effects, rather this is a straight-up realistic recording that specifically takes the listener to the space by providing a replica of the acoustic soundscape heard at the basilika. The immediacy of the transients truly delivers a literal copy of the performance directly into ones listening room.

In the darkness of “Part 3, Crucifixion” leads to lows that creep further down under, nearly rumbling with a vast resonance, evoking the image that the walls may collapse in around me. The echo organ pipes in from the back channels while the intensity builds from the front speakers into a massive crescendo that in turn takes the listener up to wherever their ears mind can go – a true musical ecstasy.

The album is rounded out with several other pieces in a variety of styles, all maintaining the high level of sound quality and immersion. Listening to the stereo version yields the expected let down for surround enthusiasts with the flattening of the space. I did find the balance and sound quality to otherwise mimic the surround version, a real plus for stereophiles. In certain ways the pieces are more musically unified, yet with the complexity of the elongated decay, some congestion occurs. I sense though that without having first listened to the surround version, this subtlety may not have been readily noticed. This is all to say that I rather enjoyed the stereo version as it still conveys a fantastic listening experience. Yet, I do miss the immersionist feeling of sitting in the pew.

Strongly recommended for fans of church organs, modern classical pieces, and the most curious surround enthusiasts. Passion Symphony is a welcome addition to the documented world of classical organ works. Stereophiles seeking what may be the best recording of a church organ will also want to include this in their library, Base2Music has absolutely released a gem not to be missed.