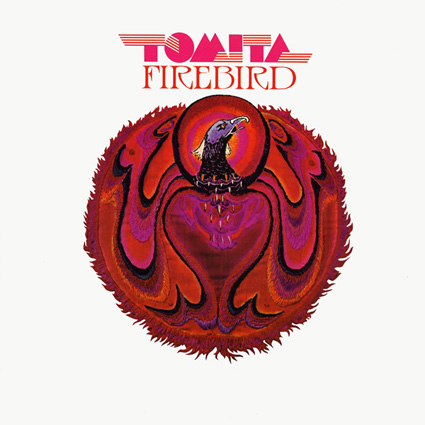 On this rendition of Stravinsky's Firebird Suite, Tomita takes the Russian composer’s music into the galaxy of component Moog synths, a Roland space echo unit that will surely phase shift you across the universe, along with a guitar and other period electronic gear. As unique as Tomita's idiom has been, this transcription stays a little closer to our solar system with his trademark spacy and phasey treatments working best on the slower pieces.
Now “Firebird” has been reissued as a quad and stereo SACD on the Vocalion label, who also recently brought us Tomita’s “Ravel” quad SACD which features one of the most famous classical pieces, “Bolero.” But, I digress, this new release of Firebird has gone back to the original quad and stereo analogue master tapes, which were recorded in Japan in 1975. Michael J Dutton has once again taken the controls creating this new remastered version.

I think Dutton’s ears are totally tuned to the audiophile world, as every remaster he has placed his hands-on sounds remarkable. This Firebird album is no exception, exuding a lovely warm, rich midrange and vibrant top. For fans of the vinyl analog medium, I continue to perceive the SACD, especially releases on Vocalion Records, as a true contender to the analog format beloved by so many. Obviously the SACD has a wider dynamic range, allowing transfers from analog master tapes into the digital realm to yield the improved results from the softest lows to the loudest high.

But it is not only the dynamics that are superlative on this quad SACD, the overall balance is fantastic, exemplified by a wide channel separation, wonderful imaging, and an amazing level of transparency. All of this becomes so evident when listening to the remastered original quad mix, which places parts throughout the listening space in all corners of the room.

The opening track “Introduction and Dance of the Firebird” is a perfect example of how I have always perceived surround sound mixes to immerse the listener. Sitting in the sweet spot, one becomes fully engaged with synthesizers, string parts and other musical elements and effects as they move around the room finding momentary places to rest. I specifically enjoy how what I perceive as a flickering flame dances clockwise starting from the back-right channel, flaring up in each corner coming to a rest in the front right, only to repeat itself again. Tomita’s unique way of interpreting Stravinsky’s music is out of this world, which is the first absolute justification for adding this release into your collection.

The second track “Round of the Princess,” continues to show the creative talent delivered on the quad mix. Listeners are continuously fed and pampered with an aural sensation as parts swell and slowly move across the soundstage. The exemplary use of ambient space aids in opening up the mix into an ethereal dimension, allowing the instruments to float freely within this specially formed universe. Sonically I appreciate the crystal clarity of the top end which absolutely shines through on the dynamic peaks of various tracks throughout the Firebird album.

Some may not care for the dated sound of a few synthesizer parts; however, it was these sounds that became the enticing magic of Tomita’s music for me back at the time of their original release. I find it intriguing how a symphonic piece can be transformed into electronic music so amazingly well, retaining much of the classical aspects while building an entirely new sound around it.

The various tracks on the quad edition of Firebird bring life to my ears, similar to watching an effect filled movie, except this is in audio only, which is a treat specifically for your ears. In fact, while I rarely provide a qualitative reference within my reviews, the Vocalion edition of Firebird truly is a five-star release. This is, without any reservation, a perfect demonstration disc to show off your sound system and the capabilities of quadraphonic releases.

My perfect surround mix paints an aural scape wherein movement and sonic adjustments provide depth and character to the mix. Firebird systematically reaches this level and at one point you will even feel like the entire room is moving around the sweet spot, becoming a true dance of the Firebird. I can easily hear how the music that Tomita releases works so well with creating such an amazing quascape. Not to belittle rock bands, but typically there is not as much depth to instrumentation given the limited number of parts that such a band often works with, leading to rock mixes that pale in comparison. Classical and the electronic format that Tomita has created had so many parts that there are a wonderful number of elements to showcase within the quadraphonic sound stage.

I still must mention how the lows are so deeply defined, since for those who have enjoyed subwoofers, you may find it hard to believe that this 4.0 release doesn’t include that channel! Yet for me it is the midrange and upper midrange on to the top that really exemplify the sonic quality of this remastered release. Firebird is pure, Rich, and filled with wonderful overtones that add zest to one’s ears while listening.

The album culminates with “A Night on Bare Mountain” a piece by Mussorgsky who has a distinctly different style from Stravinsky. Tag teaming ricochet call and answer musical lines criss cross from left to right and even back to front. Once again, dynamics prove to be enormous, and the use of the back channels builds the immersiveness of the quad mix. However, the openness of the reverberant ambience and the reflective call and answer in the front speakers absolutely make this piece so earviting. The sixth track is so spectacular that your ears will not know what hit them.

For those who prefer to listen in stereo, the SACD has a DSD stereo layer that is very compelling. Of course, it is flat compared to the quad version, and certainly a little bit more cluttered given all the layers involved in this mix. Furthermore, I also felt that there was somewhat of an upper-low hump on the stereo layer, but I assume that is part of the master and I still feel this is an outstanding remaster of the original stereo mix. Without having other copies on hand, I likely wager this may be the best available to date.

All in all, if I haven’t made it clear enough, this is absolutely a must have for your collection. Tomita fans will surely want to pick this up, classical and electronic music collectors should definitely get their copy too. For surround and quad enthusiasts, this is one of the best quad mixes that I have had the pleasure to hear, and simply put you would be foolish to pass over this one. These are limited additions, so I recommend getting yours while it is still available. Truly outstanding, a revelation in quadrasonics. I am still in awe at the quality of this release.