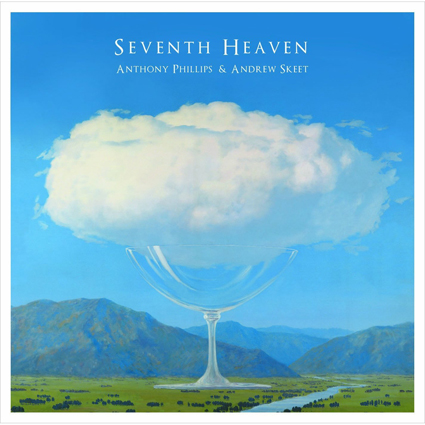 Continuing the expanded reissue campaign of Genesis founder member Anthony Phillips, Esoteric Records has released his 2012 album with Andrew Skeet titled “Seventh Heaven.” Featuring a bonus cd of ten previously unreleased recordings including the rare track “Take this Heart” written by Anthony Phillips and Mike Rutherford for the album "Songs for a Modern Church", recorded in 1973 at Charterhouse School and featuring the Charterhouse Choral Society. The 4-disc box set includes a DVD with an all-new 5.1 surround sound mix of the album, which was originally issued as a double CD set in 2012 and is primarily orchestral, featuring the City of Prague Orchestra and recorded in various locations in London and Prague.

To be clear, this is not a progressive rock release, nor the pastoral acoustic guitar works Phillips has been known for, rather Seventh Heaven is leaning strongly into the classical genre, offering a voyage of discovery with visionary pieces. Yet, for long time fans of Phillips, these classical themes will be less of a surprise, extending as a branch off of his Private Parts & Pieces collections.

The shorter formats pour out beautiful and lush string centered pieces, such as “A Richer Earth” or the more piano based “Grand Central.” Generally, the overall audio quality is excellent, allowing one to easily get lost in the guitar and strings of tracks like “Sojourn,” or the deep pastoral swoon of “Nocturne,” and the bluster of “Winter Song.” However, fans may find the jaunty, multi-part “Old Sarum Suite” to be felt as the most rounded and realized.

The surround mixes on the DVD are available in both DTS 96kHz / 24-bit and AC3 Dolby Digital. There are definitive differences between the two codecs, with compression most obviously effecting the Dolby Digital version. Most interestingly the compression also plays a role in heightening the surround effect, giving greater weight to the back channels when compared to the DTS version. Immersionists who are willing to sacrifice a bit of sound quality may end up choosing the AC3 version over the more subtle, dynamically rich and smoother sounding DTS codec.

While I absolutely want the back channels to fire, I felt the balance was more consistent with the artistic intent of the music, with subtle string swells and ambience gently emanating behind the sweet spot. The orchestra and Philips solo guitar work, among vocals and piano parts spread nicely across the three front channels. I feel the mix is focused more on a stage performance rather than a discrete mix, with the space very well used to open up the many integrated parts.

The recording evokes a more direct sound, allowing listeners to pick out individual parts without any effort. Musically it works nicely with some added treatments that offer additional space and texture. Still for fans of pure acoustic spaces and natural ambient surroundings, Seven Heaven builds its own world that can even seem unearthly at times!

The LPCM layer naturally loses the depth in the surround speakers, but gains in both dynamics and low end roundness. The transparency and channel separation that were heard on the 5.1 DTS codec are carried over on the stereo LPCM codec. I did not notice any real congestion in the mix, which often occurs when moving from a wider surround mix into the flatter stereo world. Instead, I felt parts jumping forward and behind the two main front speakers, blending the plethora of parts smoothly, creating a most beautiful release. High Fidelity Stereophiles should find this deluxe edition of Seventh Heaven a very compelling album.

But there is more, absolute fans will definitely enjoy the bonus disc containing ten unreleased pieces that stay within the tone and feel of the main album. Of course, one has to wonder how do pieces such as “As the Sun Rises” go unreleased for so long. As is so common with Phillips, the track titles pair perfectly with the music, such as “Steam Train Stories,” which builds and builds as the melody rushes past. Meanwhile “Courtship Dance” is civilized and regal, and “Flight of Strings” becomes the darting dance one would expect, plus “Tender Quintet” is poised and pensive. The bonus material culminates with “Take this Heart” with a reflecting, uplifting and rejoicing tone.

Although Seventh Heaven may not be for everyone, this collaboration is another reason to declare that Phillips really is one of the worlds’ most under-appreciated song-smiths of modern times. Recommended for fans of Phillips and those who seek a surround experience of classically based pieces.