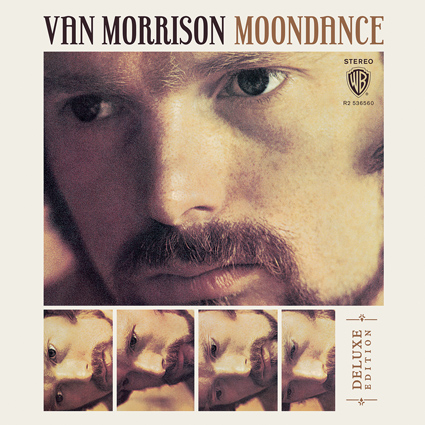 Classic rock album Moondance by Van Morrison has received the super deluxe treatment with a five disc box set.  The Deluxe Edition unearths an amazing trove of unreleased gems that take the listener right alongside Morrison and his band in the studio. There are multiple, often lengthy, takes from the recording sessions of nearly every track found on the 1970 original album, including "Glad Tidings", "Brand New Day" and "Come Running". There are also early takes of "I've Been Working", a song that would appear later that year on His "Band and the Street Choir." The early version included here is quite different from the official album version. Most noteworthy is the inclusion of "I Shall Sing", a Morrison original that was completed but left off the album. There are multiple takes of the song (spread across six tracks), plus a final mix of the finished song.

The use of Dolby TrueHD rather than DTS-HD Master Audio for an audio Blu-ray creates an absolutely impeccably clear sound. Simply put the high-resolution audio on this Blu-ray is astounding with the 5.1 mix opening up the soundstage. Consider that Elliot shiner has been one of the surround sound gurus, with titles like Layla and Other Assorted Love Songs, Hotel California and The Nightfly to his credit, we can only expect a top notch mix.  While coming from a long career in audio engineering, he was the young staff engineer at Phil Ramone's A&R Studios assigned to work with Van Morrison on Moondance back in 1969.   His mix is showy while still being subtle, providing a much wider separation to the instrumentation.  Even better, there's lateral space between the saxes, offering a startlingly clear delineation of the various parts.  It is now much easier to make out some of the piano parts on tracks like "Moondance" with greater clarity between the low end of the piano and the bass. The drums are literally the most natural sounding I have heard on any recording, and there is no harshness or edgy top end.  Morrison's voice is immaculately reproduced in all of its bluesy richness. There is a nice boost in the midrange on the 5.1 mix, providing additional clarity to Morrison's voice and the surrounding instrumentation.

In a note he's penned for this reissue, Scheiner writes, "I thought it wouldn't be easy to take an eight-track master and make a 5.1 version, but it's amazing how great it turned out."   Having mixed several albums myself, I am astounded by the excellent   surround mix, especially knowing the limited source material.

When it comes to the bonus material found on the CD's, only 13 songs are covered. Naturally the 10 songs on Moondance are found here, plus an outtake of "Nobody Knows You When You're Down and Out," "I've Been Working," which came out later in 1970 on His Band and The Street Choir, and a song unreleased by Morrison called "I Shall Sing" which was a Top 40 hit for Art Garfunkel in 1973.

However, be aware that these same tracks are covered across the other 47 selections as other outtakes, studio chatter and alternate takes.  For the dedicated fan it will surely be interesting to listen to these songs as they evolved in the studio.  There are eight takes of "Caravan," plus two redos on a later disc, seven takes of "Into the Mystic" and "Brand New Day," 13 takes of "I Shall Sing," and much more! The only songs that don't have a lot of takes or alternate versions are "Crazy Love" (one), "Moondance" (two) and "These Dreams of You" (two).