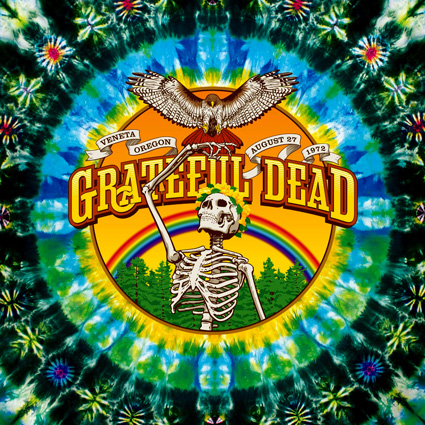 On Jerry Garcia's birthday, August 1st, 2013, the previously unreleased Sunshine Daydream concert film was screened for one night only in theaters across America.  Those who attended discovered just how amazing this concert was, and why it is regarded as part of the top 20 performances the Dead played during their three decade career.

On the fateful day of August 27, 1972, with the sun beating down hard and a bright day in Veneta, Oregon when the Grateful Dead heeded Ken Kesey's call to help save the family Creamery, the 100-degree and rising temperatures did not deter the band who were still riding high from their European Tour. Nor did it discourage filmmakers John Norris, Phil DeGuere, and Sam Field who gained entry into the Dead's tight-knit world with their promise to capture the culture and integrity of the scene. And it certainly didn't inhibit the estimated 20,000 Dead Heads who could not believe their, well, pot...luck.

In fact, this blistering day turned out to be a near-perfect little piece of the Grateful Dead experience and 41 years later Sunshine Daydream is presented the way it was meant to be seen and heard. In the theater the sound was pristine and visuals were beautiful.  The band transports the audience to other-worldly planes with definitive versions of their beloved songs like "Bertha," "China>Rider," "Playing In The Band,""Greatest Story Ever Told,""Dark Star," and "Sing Me Back Home", all with the Dead Heads in their wild and, quite literally, naked glory.

As a quintet, the band extends their free-form jams into jazzy-psychedelic realms featuring solo work by Garcia, the masterful bass of Phil Lesh, along with superb rhythm of Bob Weir.   The surround sound mix provides ample separation between instruments and a nice ambience of the audience.    Overall this is an amazing audio mix, however the video is pretty poor.  The camera work is very shoddy, with portions not even centered or focused on the musician.  Barring these shortcomings, the video provides awesome extended shots of Jerry, Bobby, and Phil, along with generous audience clips.

I picked up the Bluray, and was pleasantly surprised with an improved picture quality over my theater experience.  Colors had improved saturation, and provided my memory serves, the contrast is also better.  It is possible that the DVD version may not be as rich a visual experience, so I recommend getting the Bluray if possible.

The sound quality maintains its stellar quality with fabulous separation between the five musicians.  Jerry's guitar is placed between the front and rear left channels, with Bobby's guitar placed closer to the front right channel.  Keyboards are subtle in the mix and are placed in the rear right channel, with vocals split up front and bass and drums in the center.  The balance lends itself well to both the stage view and surround sound that liberally places instruments off the stage.  For some listeners the live mix may feel too extended toward the back channels, but for those, like myself, who prefer immersive surround sound, they will feel right at home.

The Deluxe Edition is exclusively sold on Dead.net, this most requested show is limited to 12,500 copies on Blu-ray, and an additional 12,500 copies on DVD.  A vinyl version is also available.  A standard edition with a DVD is sold through other retail stores.

3 CD 's and either a DVD-Audio or Blu-ray which includes concert video with a 5.1 surround sound mix.