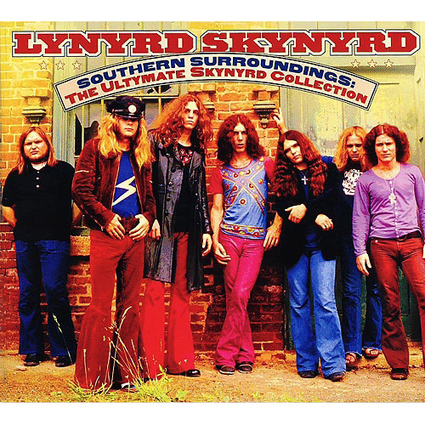 Once again you can get yourself surrounded with Lynyrd Skynyrd on their re-issued “Southern Surroundings” disc, now released on Blu-ray. This special compilation was initially available on DVD-Audio in 2012 and features some of Lynyrd Skynyrd's greatest hits all mixed in 5.1 surround sound by Grammy-winning producer Elliott Scheiner.

There are some significant differences between the 3 disc DVD set and the single disc Blu-ray released in June 2015. While the Blu-ray contains “Sweet Home Alabama (Live At The Fox Theater in 1976),” assumed to be in surround sound, the DVD set contains a second DVD which includes seven 24bit / 48k stereo tracks recorded for the BBC Old Grey Whistle Test show. Likewise for those on the go, a 14 track CD was included too.

But, given that the DVD set is already out of print, and the third party sellers are asking moderate to ridiculous prices, fans who don’t yet have surround sound versions of these tracks should surely jump on getting the Blu-ray version. Literally all music that passes under the hands of Elliott Scheiner comes out in spectacular clarity, definition and depth. The multi-channel mixes on Southern Surroundings is no exception, adding zest to these already jamming tunes.

There is no shortage of guitar parts that are spread across the soundstage with the lead taking the center channel while the riffing rhythmic guitars filling out the remaining four channels on the opening track “Saturday Night Special.” Scheiner never slacks when it comes to mixing creativity, paying careful attention to how each part musically fits with each song, such as placing the lead guitars in the front left and right channels on “The Ballad Of Curtis Loew.” While this review is based on the DVD LPCM 24 bit / 96k 5.1 mix, the sound quality should literally be identical on the newly released Blu-ray. Parts are extremely well balanced, with no heavy weighting towards the bass guitar, snare drum, or guitar solos, which I have unfortunately heard on other multi-channel re-mixes. The simple fact is these are fabulous 5.1 mixes that immerse the listener with all the dynamic energy of many classic Lynyrd Skynyrd tunes. Ooo, Smell That Smell of sweet Southern rock.

Required for surround sound enthusiasts, a must have for Skynyrd fans and those who love jam band style music. If you already own the DVD, I see no reason to upgrade unless you desperately want the live version of Sweet Home Alabama. If you pick up the Blu-ray, please email with any comments that would add to this article, since I already have the DVD, and don’t intend to get the Blu-ray.