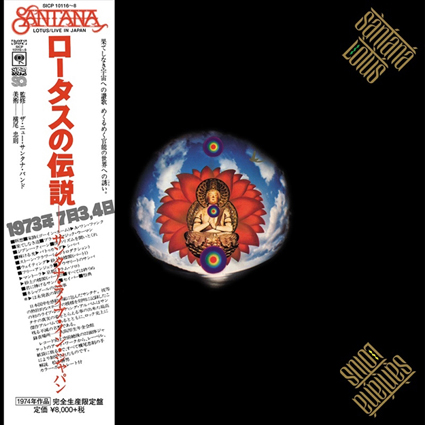 When Sony Music Japan began planning their reissue of Santana’s Lotus album, they discovered the original 16-track analog multi-track master tapes. There they were in the library sitting unused since the album's recording in 1973, and what is more remarkable is there are seven songs that were not included on the original album. Now fans will get the entire show, with the new songs appearing in the order that they were actually performed,

Sony says, “It turns out that the original tapes from the Santana Lotus Concert are in good condition. It does not sound like tape from the 1970's. We carefully chose the audio equipment and cables to make the album sound as close as possible to the original sound source. The album was mixed keeping the natural and dynamic sound image of the analog tape.”

For those of us who dig long jams and wonderful instrumental interludes, Lotus takes you there blazing in rock and Latin rhythms. Stretching over 3 Hybrid SACD’s which contain both a 5.0 and 2.0 mix, this is a fabulous record of an incredible performance by the acclaimed guitarist and his band.

Yes, the album truly sounds great, providing a wide soundstage and rockfish dynamics that get you pretty close to being in the front of the auditorium back in the day. But, for immersive multi-channel fans like myself, this new 2016 mix fails to deliver any true sense of being wrapped in sound. Rather, this is a perfect document of the concert, with the audience at the rear and the band wailing up front. Reflections hit off the back speakers, and ambience spreads to the sides. Regardless, I absolutely feel a pleasant sense of space which lends to the energy and realism of sitting in a perfect seat at this beloved concert.

There are moments where guitars and keyboards step off the stage, and I can’t help but wonder how different this new mix is compared to the original quad LP. Although the center channel isn’t used, there is a nice depth to the stage with a nice balance across the spectrum and generally good space among the instruments. The stereo version may end up being the go to version, as it conveys the recording extremely well. For me it actually comes down to the performance, which frankly is worth the price of entry.

As a bonus, this lavish package is housed in a 7 inch cardboard fold out with plenty of extras, such as pictures, fold out posters, and an extensive booklet for those who read Japanese. Be advised not to pull everything out at the same time upon receiving your copy, as some have found it difficult to reassemble the package in the same order.

At above $70 US, this release is best suited for high resolution audio fanatics and super fans of Santana. Deep pocket surround collectors may want to add this, especially for those who prefer front centric mixes of live concerts. In any case, if you desire this, get it now before it goes out of print and starts commanding ridiculous prices on the secondary market. Likewise, remember this contains the complete concert, significantly adding to its value.