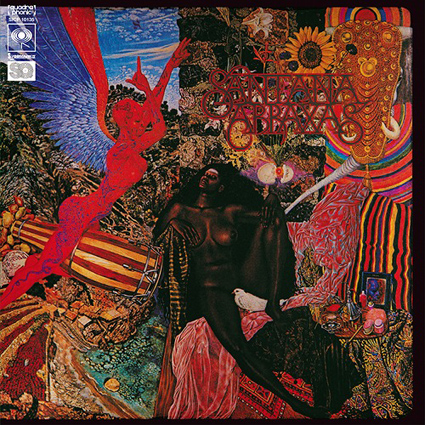 Santana's 1970 acclaimed Abraxas album has been released as a multi-channel quad Hybrid SACD edition for the first time by Sony Japan. Converted from the original 1974 Quadraphonic master and transferred to DSD, the CD layer contains the stereo mix mastered from the latest SACD remastering. The disc is housed in a 7-inch mini LP cover featuring artwork that faithfully replicates the US quadraphonic LP design. This special release also includes a poster replica.

Abraxas is released as a Limited Editions, and follows in the path of previous releases from Sony Japan, which have all been of high quality and favored by quad fans around the world. I now have three different quad versions each in their own unique format which allows for a great comparison. Years back I picked up a DTS-CD which technically is a 5.1 surround version, but based on the quad mix. In reality only a small amount of the blended front channels was sent to the center speaker along with just a smidge more of the lowest end of the base spectrum sent to the sub-woofer channel. I effectively never really noticed either of these channels firing until this was pointed out to me by my friend, Mike Viera from the YouTube channel Life in Surround, who also offers commentary in a video review below. So, upon careful listen and a dissection of the track one should hear those extreme subtleties emanating from the center and sub-woofer speakers.

But this review is not about the DTS-CD, rather it is about the 2020 Hybrid Quad SACD that was released by Sony Japan. Still, it is important to finish my comparisons before letting you in on the massive benefits of the Super Audio disc. Simply put, the DTS-CD dramatically suffers from a lot of phasing across the channels, and this becomes very apparent at the start of “Black Magic Woman” as the keyboards smear their way around the room. Also, I deep dived into comparing the song “Samba Pa Ti,” which has the guitar sounding like it was overly run through a ring modulator, especially when compared to the reel to reel fan conversion to 96kHz / 24-bit quad FLAC I have on hand, and of course even more so when compared to the quad SACD. In fact, when I first received the DTS-CD, I really believed it was a bootleg due to it poor sound quality and phasing issues. I felt like a blanket have been thrown over the entire mix and the out of phase issues were so horrendous that seemed highly probable that it was a lousy transfer, made by someone in their basement. Furthermore, the DTS-CD has a serious lack of presence, significantly decreased dynamics, and only moderate channel separation. On the other hand, these shortcomings do not exist on the SACD, a further hint to its superior sound quality.

Now, I still must diverge for another moment by adding comparative notes regarding the fan made reel-to-reel transfer. Before the SACD, owners of the duplicated reel-to-reel analog tapes would have possessed the closest source to what the transfer engineers used for the 2020 SACD. Truth be told, the fan transfer sounds particularly good. However, there is a hump deep in the low-end and clearly a lack of sparkle in the upper frequencies. Overall, the channel separation is excellent, making the fan transfer a worthy contender to the new SACD.

But let us get on with it! Simply put, even with an acceptable fan transfer, there is nothing that compares to the sonic quality of the DSD transfer. The Super Audio CD is truly remarkable from both a dynamic perspective and tonal spectrum range. It also has excellent transparency and channel separation, all of which give the mix incredible liveliness. From the moment Black Magic Woman begins with the keyboards rotating clockwise around the room without any phasing issues, listeners will surely notice that the SACD is in the pocket. Unfortunately, the quad mix does push the Clave up a bit too far at the start of Santana’s most famous song, which is certainly annoying, and absolutely more revealing on the SACD given its dramatically improved clarity in the upper regions.

Throughout the album the wildly discrete mix throws instruments to all corners of the room. On Black Magic Woman the guitar has been placed upfront in the right, and keyboards are placed in the left. Meanwhile the congas jam from the back left and the base pumps in from the rears. The slightly delayed vocals appear to come from everywhere as they soar from the front and delay to the rears while the band plays all around the sweet spot.

“Oye Como Va” takes the quad mix into a different spatial dimension by placing the guitar in the back left channel, the organ in the front left channel, and the vocals spreading across the front speakers. Congas and drums take their places around the room which continues to excite the listening experience with this all-encompassing mix that gives real life with true separation of parts.

The jamming nature of Santana’s music lends itself exceptionally well to the quadscape given the numerous parts that can be placed around the room. But even gentle ballots like Samba Pa Ti sound amazing in quad with the organ humming from the back right speaker, plus the acoustic guitar striking out the rhythm softly from the back left channel, and the congas beating from the front left, while the guitar rings out its melody in the front right speaker. There is really good use of depth with the delayed guitar moving across the space.

The aural tapestry of each song is utterly unique, making the quad experience that much more enjoyable. The track “Hope You're Feeling Better” stays on that unique path with the dirty organ rockin’ from the back left and guitars soaring across the front channels making their way into the rears. There is an awesome use of what seems like clapping hands that is bathed in a lot of reverberant echo that absolutely opens up the depth, sinking deep into the front speakers. It is this kind of top notch clarity that reminds me about the main reason I listen to high resolution audio. One really cannot get this kind of detail and transparency off of analog duplicated formats.

The stereo mix is certainly the most well-known version for fans of Santana. I say this, because the mix is distinctly different, most notably on the appended instrumental “Gypsy” which often is considered part of Black Magic Woman wherein listeners can easily hear the gypsy cry underneath the guitar solo on the quad mix. Her cry is masked on the stereo version among other subtle changes including a normalized volume for the clave at the start in the first part of the song. Now, when it comes to sound quality, I am extremely happy with The stereo transfer to DSD, it really pops out from the front speakers and offers excellent dynamics as well as a full tonal range without being overly powerful in the low end. Actually, in many ways because I am so accustomed to the balance of instrumentation on the stereo mix, that I prefer it over the quadraphonic mix. The subtle yet important balancing of vocals and even guitar solos carry weight to my ears, it has often been said that much less time was given to quad mixes due to their limited market, thus minor differences can become very apparent. Still, I also am delighted to be immersed by the band, and so there will always be a time and place for the quad mix of Abraxas. I may never have written this before, but I have a feeling in the case of Abraxas I will be splitting equal time between these two version.

Abraxas undoubtably is Santana’s best known early album. Its sonics are extremely good, although it does not live up to the pure clarity of his later release “Supernatural” which is truly stellar. For quadraphonic enthusiasts this is an absolute must have as it is the best version available that I am aware of. Collectors will also enjoy the 7 inch format which provides larger cover art and easier to read text albeit mostly in Japanese. This is the definitive edition for both quad and stereo high resolution listeners, you will surely enjoy either of the two DSD layers.