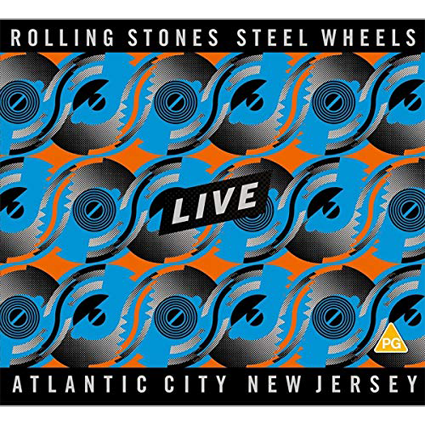 Steel Wheels Live captures a jamming show at the Atlantic City's Convention Center in late December of 1989, towards the end of the band's 60-date run through the stadiums of North America during their gargantuan comeback tour. Although many had thought the band had become worn out as they neared their fourth decade, and as it turned out this tour would become bassist Bill Wyman’s swan song with the band.

And now another three decades on, Steel Wheels Live has been released as a 2 CD + 1 Blu-ray set, or alternatively on DVD. Looking back, it is incredible how young and energized the band appears.

The set contains the well-travelled hits “Mixed Emotions” and “Rock and Hard Place,” as well as deeper cuts like “Sad Sad Sad,” “Terrifying,” and the Keith Richards-led “Can't Be Seen.” There are also a couple back-to-back hits that were current at that time: “Undercover of the Night” and “Harlem Shuffle” melded in with early favorites like “Paint It Black” and “Ruby Tuesday.”

The show also features a couple of guest musicians including Axl Rose and Izzy Stradlin join for what Mick Jagger refers to as the live debut of “Salt of the Earth.” Plus, Eric Clapton is on fire as they slowly burn away on “Little Red Rooster,” he is soon joined by John Lee Hooker for “Boogie Chillen.”

For high resolution audio enthusiasts, Eagle Rock has released Steel Wheels Live on a variety of formats, including vinyl and an expanded deluxe set. The 2 CD + region free Blu-ray edition only offers standard resolution video, clearly dating that aspect of the recording, but the audio side offers DTS-HD Master Audio 5.1 and uncompressed LPCM 2.0 stereo audio. Just kick back to watch this full concert which clocks in at 2hours and 37 minutes! Alternatively, there is also a region free DVD containing Dolby Digital Stereo, Dolby Digital 5.1 Surround Sound and DTS 5.1 Surround Sound. But you know the drill, the Blu-ray offers better quality audio given that the codecs are uncompressed compared to the DVD.