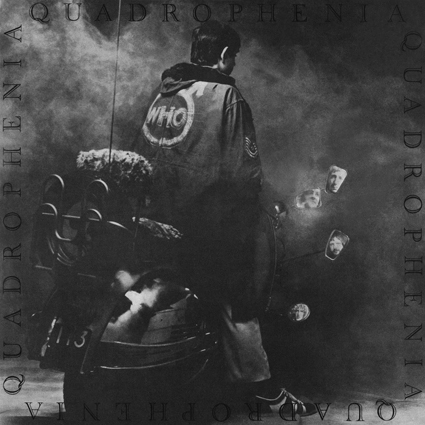 A couple of years ago the Who released a super deluxe version of their 1973 studio album Quadrophenia. However, the surround version didn’t contain all the tracks. Universal Music has corrected this horrible omission and has released the entire album in 5.1 surround sound on the Pure Audio format, which also includes a high fidelity stereo mix.

Admittedly I had always favored their first rock-opera Tommy, essentially over looking this masterpiece for many years. This re-issue in multi-channel audio has made it very apparent to me that Quadraphenia is equally awesome and musically more cohesive than Tommy. Of course I also have the Quadrophenia film to enjoy, but like other purists I simply prefer the original version, now available on this new blu-ray Audio release.

The sterling surround mix supervised by Pete Townshend is available in either DTS Master Audio or Dolby True HD. Listeners will find a slight coloration difference between the two, and I am certain you will find a preference for one over the other. I happen to like the DTS for the round bottom and slight drop-off in the higher frequencies. But, the Dolby really makes the guitars punch through the mix and add some nice sizzle to the cymbals. Regardless of the lossless codec, it's a real treat to rediscover Quadraphenia in 5.1!

Naturally the front channels contain bass and drums, along with main thythm guitars and keyboards, plus Daltrey’s vocals. Kick back and notice that instruments take up different locations from track to track, providing for a fresh listening experience throughout this rock-opera. Some fun mix effects can be found, most notably at the end of “The Real Me” where Roger Daltrey’s voice bounces among the five main channels as it echoes at the close of the song.

As has been common thread among many of the surround mixes reviewed here, lead vocals carry from the front center channel, spreading across the sound stage to the rear channels with a reflection. This is also easily heard on Keith Moon’s drums, with guitars and keyboards holding their ground in whatever corner they were placed in for a given track. “Helpless Dancer” stretches the use of surround with call and response vocals running among the various channels, front to rear right, rear left, and so on. There are a number of nice surprises that I will leave you to discover on this mix.

But don’t close your eyes while listening, a continuous photo montage that repeats with high quality 1080p stills of The Who and frames from the film version of Quadrophenia roll on throughout the disc.

Also included is a LPCM Stereo mix along with the original 1973 stereo mix. I believe the dynamic range and clarity surpasses any of the vinyl editions, and for lovers of stereo this should be your go to version. But, the spread and depth of the surround mix frankly takes this classic album to new heights, and is the version for me.

This is a must have for any surround sound fan, lovers of the Who, and anyone seeking a high-resolution version of this incredible album.