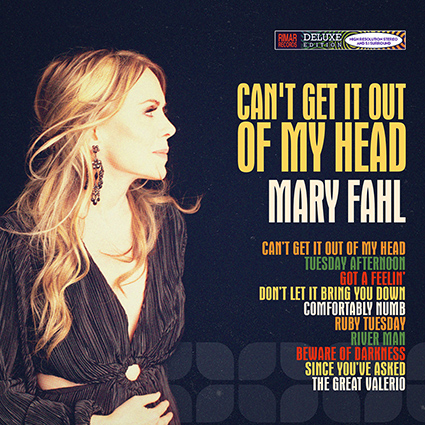 Mary Fahl has just released her new album “Can’t Get It Out of My Head” which looks back to some of the essential music that has brought her sustenance and clarity by reinterpreting songs from her greatest inspirations. Of course, Pink Floyd is part of that mix, especially given that her first surround sound extravaganza completely reinterpreted their classic Dark Side of the Moon. Also, on this new album fans will find songs penned by the Moody Blues, George Harrison, The Rolling Stones, ELO, Neil Young and others. These modern and rearranged versions were conceived during pandemic times and are her tribute to the music that defined her as an artist.

For those not yet familiar with Fahl, she is an expressive and emotional singer/songwriter who co-founded the progressive rock chamber-pop group October Project, where she found fame as the lead vocalist. The band was well known for their lush harmonies, sweeping melodies and Fahl’s unique and powerful vocals. I was fortunate to see them live before they disbanded after only two records. She remains one of my all-time favorite singers and delighted that another solo album has arrived featuring a surround mix on Blu-ray!

Recently Fahl has been touring and recording on her own label, Rimar Records, and her latest releases have garnered awards and certainly her 2021 surround version of her 2006 album “From the Dark Side of the Moon” has become critically acclaimed by multi-channel enthusiasts around the globe.

Here Fahl follows up with “Can’t Get it Out of My Head,” a collection of classic rock songs that she considers essential to her development as an artist. She says, “Like old friends these are my musical home in many ways. I fell in love with each of them at the quintessential coming-of-age moment when music goes straight into your heart with no filter and these songs became part of my musical DNA… Most of these covers come from the first albums I ever bought using one of those Columbia House ‘get 12 free albums for a $1’ mail order programs. I played these records endlessly.”

She has once again teamed up with producer Mark Doyle making these songs their own while paying tribute to the original version. Doyle’s role is significant as he wears the music director hat and played every instrument on the album except for the strings and drums. Fahl comments, “We recorded most of it at his home studio and a majority of the vocals are taken from the first time I auditioned these songs with Mark for the album… there’s something fresh, unstudied and unselfconscious about working that way. Mark has been essential to the process of helping me make these great songs my own without sacrificing the essence first captured by their original creators.”

High resolution audiophiles will be delighted to know that this album is available as a deluxe CD + Blu-ray edition featuring 96kHz / 24-bit LPCM 5.1 surround mixes by Ronald Prent and Darcy Proper, the Grammy-nominated husband and wife duo known for their work on surround versions of Mando Diao, Simple Minds, Hooverphonic, and more. For this release they provided a fully immersive and clarity rich listening experience described further below. A single CD is also available, and either edition can be pre-ordered from Fahl’s website store. Also, fans can get a physical copy signed and personalized by Mary for a few dollars more exclusively only from her official website. Furthermore, a multi-channel FLAC download is also available too.

Fans will find that the original essence of each song has been nicely carried forward on Can’t Get it Out of my Head. Yet, there are plenty of distinct and brilliant creative differences that make this collection a precious listen, alongside a very pleasurable immersive experience. While the songs sound classic, the striking sound quality, modern spatial reverbs, and current synth and brilliant tone of the other instruments place the recording squarely into the current day.

On the opening title track the acoustic guitar gently strums from the front with Fahl’s vocals isolated in the center channel, while a subtle ambience of synthesizers and vocals surface from the surrounds. A snappy snare drum gently strikes in between the front channels, while the balance of the band, including bass and keys, spread widely in the front speakers, go on to open the mix into an expansive space that wraps around the sweet spot for this Electric Light Orchestra cover.

Musician and producer Mark Doyle has fabulously recorded the various instruments including bass, drums, keyboards, guitars, and of course Fahl’s incredible vocals. I dig the sparkling clarity of the acoustic guitar and especially the drums that are so well defined in the closely miced space, allowing for a fantastic definition of each part to the kit. The base penetrates through with near ground-breaking roundness, while the strings are smooth and extremely vibrant.

Of course, many fans like myself are here for the angelic vocal work of Mary Fahl, which richly soar from the center speaker across the soundscape, delaying and reverberating in the surround channels. Her interpretation of The Rolling Stones “Ruby Tuesday” follows a similar path of the original version while dipping into modern tonal ecstasy with her accentuated vocals. Strings remain in the surround channels, lending to the spatial quality of the mix, while most of the remaining instruments have been spread across the front speakers.

Possibly the 5.1 surround masterpiece on this release is her cover of the Moody Blues song “Tuesday Afternoon.” Doyle added a plethora of orchestration, allowing for a greater use of the surroundscape, along with the backing vocal Sanskrit chants during the bridge in a psychedelic fashion from behind the sweet spot. Also check out the acoustic rhythm guitar shuffling between the left and right front channels along with other elements that nearly feel as if they are swirling around you. Instead, these string and synth parts are merely playing off one another as they pop up around the surround space, all while providing incredible ear candy for immersive listeners.

A fully immersive experience is on fire again on the Neil Young song “Don’t Let it Bring you Down.” Featuring a proggy guitar solo Interlude and wonderfully orchestrated chamber string parts that fan out into the surround speakers. This classic song absolutely takes on a life of its own with this reimagined version. Right from the start, dynamics truly push through, bursting right in and simmer down to a point where Fahl’s vocals are upfront in the center and the strings expand the aural space into the surround channels. I especially like the reverberant space, which decays after an initial delay of Fahl’s lead vocals hit the surround speakers, splashing wetly behind and beyond.

The other great songs on the album that I haven’t mention here pretty much have been mixed in the same pattern. From Doyle’s expertly played Floydian guitar solo on Comfortably Numb to the various keyboard and other associated parts on deep tracks such as George Harrisons “Beware of Darkness,” this collection is a passionate interpretation of 10 classics.

Please know it is very important to check out the extras. Here fans will find chamber string interpretations of both Ruby Tuesday and Tuesday Afternoon. I personally love these stripped-down versions which are also available in both surround and stereo. and their inclusion has totally wet my appetite for more versions like this! In other words, my fulfilled fantasy would be to have a completely alternate albums of the same tracks utilizing the stripped-down chamber string mixes. Fahl’s vocals are certainly more prominent, not because they are mixed any louder, but rather because they become more like a soloist performing over a significantly subtler instrumentation.

The 2.0 stereo LPCM 96kHz / 24-bit mixes are equally compelling, and for audiophiles, these offer an extremely clear and well-defined mix. In some ways I found the stereo mix to be more satisfying, much due to the careful attention to balance and placement of the various instruments and the reverb that aids in creating a depth of field. I felt that parts stood in front, and some fell behind the main channels, providing for a most pleasurable stereo listening experience.

Absolutely recommended for fans of Mary Fahl, the October Project, and collectors of surround sound music releases. Can’t Get it Out of my Head certainly is a worthy listen for classic rock enthusiasts, and likely of interest for progressive rock collectors, given the proggy leanings of Mary Fahl.