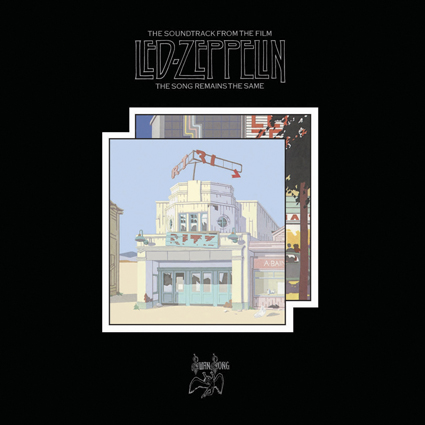 Over the years I have purchased a few different editions of The Song Remains the Same, the official live album and movie by Led Zeppelin released during their tenure together. I saw the film back in the theaters and caught up with the band live at the same acclaimed arena, Madison Square Garden, a couple of years later. I had my vinyl copy, which I later “upgraded” to compact disc. I also picked up a VHS version and later a DVD version of the film.

However, fans like myself, and certainly discriminate listeners have never been satisfied with the sound quality of this release. It should come as no surprise that after a full reissue campaign by which guitarist Jimmy Page embarked on the task to remaster the band’s entire studio catalogue, a reissue has now arrived in multiple formats for this well-regarded live concert performance.

The reissue is available on CD, Vinyl, a super deluxe edition that also includes two DVD’s, and as a single Blu-ray, the later which I have reviewed here. It is important to note that the Blu-ray is not the theatrical version, removing all of the chatter, intros and outros, it essentially is a Blu-ray Audio disc which contains a few video bonuses. In fact, one doesn’t need a monitor as the Blu-ray displays a variety of still images. Actually, this is the concert album in high resolution audio!

For audiophiles, this new edition has been remixed from the original multi-tracks in both surround and stereo at Metropolis Studios, London and fully approved by the band. Featuring three audio options, DTS-HD Master Audio 5.1, DTS-HD Master Audio 2.0 and LPCM 2.0, all in 24bit / 96kHz. There is essentially no difference between the two stereo versions, which still lack quite a bit of the dynamic punch end lower end. I speak of this first, as through the years fans like myself have listen to the various iterations that have been released. Guitars still sizzle and cymbals are a bit splashy. Yet, there is an overall extremely subtle adjustment in balance which pushes the bass up and decreases the guitar, elevating this new stereo versions to the top when compared against the 16bit CD and AC3 DVD’s I have on hand. I am sure readers are wondering, is it worth plunking down a few more bucks again?

The cream of this edition is certainly the surround mix, which places the listener into the venue, but for those who have experienced MSG, by no means will you suffer from over emphasized bass that rolls throughout the cavernous room. Nor will you hear the delayed echoes from the main speaker stacks hitting off the back walls. Rather, when seated in the sweet spot you’ll be nicely immersed in the ambient space with a additional "oomph" in the low end, and a slightly more focused forward mix of Robert Plant's vocals emanating partially from the center channel and spreading equally to the remaining front channels.

Certainly, the surround mix offers a more lifelike accounting of the arena, but don’t expect to find any discrete use of the back channels other than for reflective ambience, which sometimes may even seem overpowering. Lower mids tend to sound somewhat murky from time to time, which I can only attribute to the original recording made by Eddie Kramer and likely effected by the generally horrible hall acoustics. In true 70’s heavy rock form, you’ll likely notice the occasional issues with feedback.

As much as I enjoy the immersive live quality of the 5.1, I still don’t feel the upgrade to surround is a drastic improvement, and certainly would not consider the super deluxe edition. Nor do I sense that the vinyl and CD’s warrant a required purchase either. On the 5.1 version, John Bonham's stick work on cymbals gets buried at points throughout the mix, although the tom-toms still hammer through very consistently. I sense the crowd noise in the back channels seem to be a little artificial at times, bubbling up and churning for no apparent reason, it is possible that what I hear may be out of phase sections in the crowd overlay. Yet, the minimal cost of the Blu-ray with the inclusion of the 5.1 mix make it compelling for Led Zeppelin fans.

The band’s epic Dazed and Confused stretches the use of the rear channels with guitars and vocals shooting across the soundstage, elevating the cavernous space of Madison Square Garden. Jimmy Page’s solos tear around the room as he sustains notes and picks out the leads. For me this is still the jewel of this album with good dynamics and the expanded use of surround.

For collectors, there are four bonus tracks that also have been mixed in 5.1 and include video which is pretty rough. I initially scratched my head thinking why wasn’t the concert video included, then I remembered all of the extras that would have made it a serious editing task to include just the video elements for the concert portion.

For those who have downloaded any of the high resolution remastered studio albums, the Song Remains the Same still doesn’t match the improved level of audio quality. Tonally it still is thin and lacks the fatty warmth of many other analog concerts from the era. There is an improvement in the overall dynamic range, but I fear that much of that was squeezed during the recording process.

Given the many times I have purchased this same album, I feel it is only a necessary addition for completists, audiophiles seeking the best audio presentation, and by all means for anyone who has not yet picked this up in any form. It truly is a classic concert that fans of rock and roll must have.