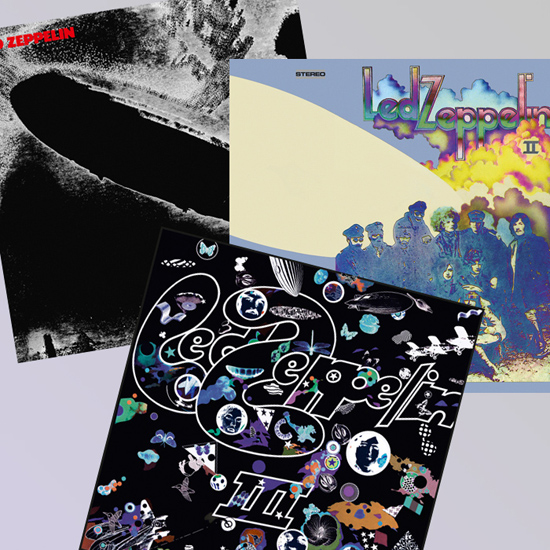 In early June 2014, the first three Led Zeppelin albums were released in a variety of packages, all remastered by producer and guitarist Jimmy Page.  The band also has open its vaults containing dozens of unheard studio and live recordings.  Each of the first three albums feature a second disc of audio comprised entirely of unreleased music related to that album.

At first glance the options seem overwhelming, but when broken down by album, the there are three media options and some digital options.  Fans can obtain a single CD version containing the remastered album, a two CD Deluxe version containing the remastered album and companion material on the second disc, or a Super Deluxe Edition, with two CD’s identical to the Deluxe set, but also contains to heavy weight 180g vinyl discs with the same content as the Deluxe CD package, and a download card with 24/96 files.  Physical media is pretty much available at al retailers, but fans who would like to obtain a digital 24/96 file of either the remastered album or Deluxe version containing the companion audio can visit Pono Music, Hi-Res Audio or HD Tracks.  Downloadable digital formats include AIFF, FLAC, ALAC, and WAVE, all in high resolution 24bit / 96kHz.  Of course you could be lame and get the MP3 files literally anywhere too… but you can also stream those from Spotify.  We won’t discuss the lo-res codecs here.

The additional material included on their albums with the Deluxe and Super Deluxe sets starts with an unreleased October 1969 concert from Paris, France on their Led Zeppelin I set.  Then released only seven months later, their second album, Led Zeppelin II features the first peek into their recording sessions, uncovering alternate mixes of five songs along with  backing tracks to "Thank You" and "Living Loving Maid," and a previously unreleased song titled "La La."  From their third release, Led Zeppelin III, additional material includes several tracks which continue to pull back the curtains, revealing the depth of their recording process on seven outtakes of songs from the album and three previously unheard compositions: "Jennings Farm Blues,"  "Bathroom Sound," and Zep’s take on the blues classics "Keys To The Highway” into “Trouble In Mind."

But, let’s get to the real reason you are likely reading this review, which I seriously hope is your desire to know how the high-resolution versions compare to their previously released CD’s and vinyl.  I downloaded the 24/96  FLAC files, and transferred the files to a USB thumb drive which I inserted into my Oppo 95 player.  I immediately noticed a real snap in John Bonham’s snare drum and a sweet tingle to his cymbals.  Jimmy Page’s guitars had a nice sizzle and Robert Plant’s vocals have greater clarity.  There is a bump in the lows that accentuates the kick drum with a snappy thwap and warm roundness to those deep bass notes John Paul Jones’ plays.  Overall the remastered albums are more reverberant, with greater definition to the natural room ambience on these high-resolution versions.

But really, how different is the high-resolution remastered versions from the CD’s and vinyl.  First, I am comparing these to the original masters, and frankly I feel it is a matter of taste.  On the high resolution versions I like the sparkle in the upper mid-range and can feel the bottom push through more, much closer to a live performance.  But fans can buy the 2-CD deluxe version of the remastered CDs at half the price and likely be satisfied with the sound.  While the hi-res downloads are a lot less than the Super Deluxe versions, which currently sell for over $110, it is still hard to rationalize the nearly $30 price tag for each of the 24/96 downloads of the Deluxe set material.  And forget about receiving liner notes, while the download includes a PDF, it is the cover artwork only, pretty sad for the amount of money charged.

Regardless, here are a few more favorable comments that may sway listeners back to picking up the high resolution downloads.  I really found the imaging and the soundstage to be clear and wide, I truly like what I hear, and I have listened to plenty of Zeppelin over the years through a variety of speakers, including large studio monitors when I worked in the recording business a while back.  Like me, I am sure that for most fans these tracks are etched in their brains.   Yet, the listening experience is fresh, literally new an invigorating, without any hint of audio fatigue.   Don’t mistaken tape saturation or overdrive of the bass and guitars to be anything other than what they are, I actually found the high-resolution versions to be distinctly less edgy and yield a slightly improved dynamic range over the CD and vinyl versions.  However it is extremely important to note that the remastering is not a new mix, thus it is literally only as good as the original stereo master.  Certainly in the days of this mix, compression was used to limit tape distortion as well as allowing for greater saturation on the tape to mask tape hiss.  We can be thankful that the master was transferred at 24/96, which comfortably covers the analog tapes dynamic range and effectively has enough samples per second to amply define the sound on these classic rock recordings.

Remastered Vinyl, CD's or as 24/96 download in your choice of AIFF< FLAC, ALAC, or WAVE.