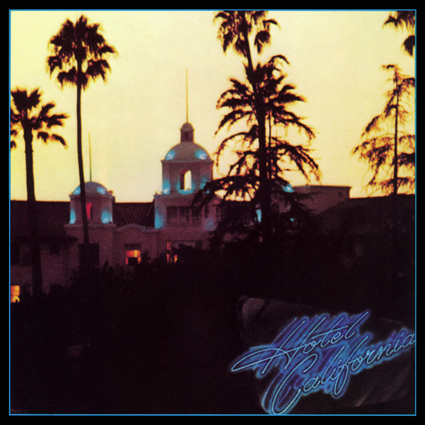 The classic Eagles album, Hotel California, has been reissued by Warner Japan in a 5.1 and stereo mix on a Hybrid SACD in August 2011. Previously only available in the United States as a multi-channel DVD-Audio, and sold at obscene prices on ebay, fans and collectors should grab their copy of this release today! Includes description and lyrics.

Hotel California was the first Eagles album to feature Joe Walsh. By combining with Don Felder, they created a potent tandem and pushed the band to a harder sound. From the opening guitar riff, to the cynical and vivid lyrics to the closing guitar coda, the title song is a tour de force. Don Henley sings with a snarl in his voice and Mr. Walsh and Mr. Felder trade soaring guitar licks. "Hotel California" became their third number one single, and won the 1977 Grammy for Record of the Year and it is hard to tire of hearing it.  The surround mix offers depth and wideness not available on the stereo mix.  From cymbal swells that swirl outward from the front to the backing guitar that fills the rear, listeners will enjoy the rich clarity of this recording.  The kick drum snaps and the high hat sizzles, while the bass comes to life with warm lows.

The second track, "New Kid In Town" was the album's other number one single and Glenn Frey sings with a smooth charm. Acoustic rhythm guitar falls to the back along with second electric guitars, opening the front for keyboards, bass, drums, and vocals.   This really allows the keyboards to breathe and set the mood of the song.  A pleasant use of reverb reflects the front solos against the back, placing the listener in the middle of the band.

"Life In The Fast Lane" is the infamous rocker that details the hedonistic lifestyle of the late 70's that the band wholeheartedly embraced.  There are plenty of layers to this mix, with at least four guitars thrown to the four corners of the room.  However, this also creates a disjointed soundscape in surround as parts come in and drop out.  Instrument location stays static, which seems a shame as there are several places where they musically could take some movement within the multi-channel mix.

"Wasted Time" is a pretty ballad and the orchestral reprise of the song leads into a stinging rocker "Victim Of Love". Joe Walsh's Eagle lead vocal debut is surprisingly sweet on "Pretty Maids All In A Row". Randy Messiness' swan song with the band is the soaring "Try & Love Again".

The album's closer, "The Last Resort", almost matches the title cut in power and brilliance. It tells of the pilgrimage from the east coast out to California and all that it has to offer.  The surround mix envelops the listener as the song progresses and instrumentation is added to build the dynamics of the piece.  Backing vocals are placed toward the rear with second guitars.  The piano falls toward the center of the mix while bass and drums remain up front with Don's vocals.

Overall, this multi-channel SACD is absolutely worth the price paid to import it from Japan.  We can only hope that Warner will continue making great surround mixes available, and begin providing them domestically in the United States.