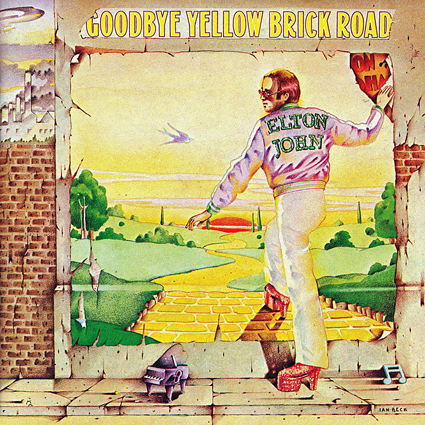 Over the past several years a number of Elton John albums were released in both SACD and DVD-Audio, including Goodbye Yellow Brick Road.  Now, once again, fans are asked to open their wallets for a Blu-ray version of his classic 1974 release.  While SACD’s of other albums remain available, Goodbye Yellow Brick Road can be found at ridiculous prices for the SACD version, and the DVD-Audio has all but vanished.

Clearly for those who own the SACD, there is no reason to downgrade to the Pure Audio Blu-ray, as the content only contains 24bit / 96kHz sampling rates.   Likewise, fans who have the DVD-Audio version likely won't  hear any improvement, as the sample rate is identical.

For all other fans, the re-issue on Blu-ray provides access to the 2003 surround sound mix created by Greg Penny, along with a high fidelity version of the stereo mix.  Having already added this to my collection a few years back, I can say without a second thought that this is a fantastic surround mix.  There is wonderful separation of instruments, and surely listeners, like myself, will notice parts that they simply overlooked from the vinyl version.  Penny has gone through great lengths, taking about one month per album to remix the tracks for surround.  He has improved the sound, while also holding true to the analog technology which it was recorded on.  There is still some audible tape hiss, but nothing that detracts from the songs, and generally is masked by the levels of much of the music.

We can only hope that Universal will continue their reissue campaign of Elton John’s 1970’s albums.  Surround sound fans have been waiting to kick back and enjoy the remaining albums Penny mixed, which include:  Don't Shoot Me I'm Only the Piano Player (1973), Caribou (1974), Rock of the Westies (1975), Blue Moves (1976).  However, I wager that the label instead will choose to reissue the material already available on SACD, which includes:  Elton John (1970, Tumbleweed Connection (1970), Madman Across the Water (1971), Honky Chateau (1972), Captain Fantastic and the Brown Dirt Cowboy (1975).  As I write this in early March 2014, no news has been provided for these other classic rock albums.

For fans seeking a high definition stereo and multi-channel mix of Goodbye Yellow Brick Road are recommended to pick up the Blu-ray release.

Check out this video with Greg Penny talking about mixing the various Elton John albums.