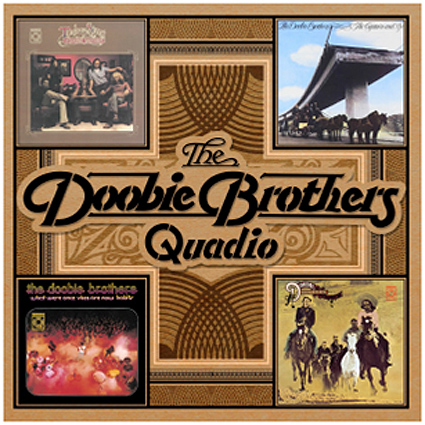 For fans it has been a long time waiting, and now Rhino Records has released a 4 disc Blu-ray Audio box set that spotlights four of the Doobie Brothers classic albums featuring both quadrophonic and high-res stereo mixes. This year the band celebrates two major milestones, the first marks their 50th anniversary and the second is their induction into the Rock and Roll Hall of Fame in November of 2020.

Remastered from the original four-track Quad and Stereo analog masters, the box contains the following four albums in their entirety: Toulouse Street (1972), The Captain & Me (1973), What Were Once Vices Are Now Habits (1974) and Stampede (1975). These seminal early albums all achieved either gold or platinum status and replicas of the original vinyl record sleeves have been packaged in a clamshell box. Hits and classic rock radio staples are strewn across each of the albums and include “Listen to The Music,” “Rockin’ Down the Highway,” “China Grove,” “Black Water” and many more.

The Blu-rays are authored similarly to the Chicago Quadio release, featuring 192kHz / 24-bit stereo audio and DTS HD Master Audio Quad. Apparently, there are two release dates, the first is September 9, 2020 for fans ordering directly from the Rhino Records store, while the later is for retail outlets on November 6, 2020.