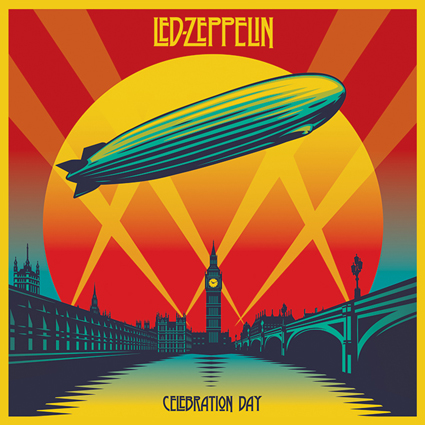 On December 10, 2007 Led Zeppelin reunited for a single performance at the London 02 Arena as a tribute to the late Atlantic Records president Ahmet Ertegun. A crowd of 18,000 lucky attendees who had won the lottery from the 20 million that entered for tickets were rocked by a two hour set by this power house quartet. Celebration Day is certainly not a substitute for their original recordings where Robert Plant squeeled out vocals on beloved favorites like Rock 'n' Roll, settling instead for a mature voice of the 59 year old singer. Even Jimmy Page has tempered his playing and engages the audience with his masterful technique developed over the ensuing decades.

Putting the vocal struggles aside, Plant's still-sturdy pipes get stronger as the set progresses. By the time he hits Kashmir near the end, he is traversing many of the vocal hurdles. Page rips through and dominates a gloriously ragged In My Time of Dyin' and goes onto shine through out The Song Remains the Same. John Paul Jones continues to anchor everything on bass, and then slides behind the keyboard, where he gets hazily introspective on No Quarter or funky on Trampled Under Foot.

What a splendor to see late drummer John Bonham's son, Jason, who nails both the tricky fills and the sheer muscle power required to play his dad's powerful parts. Check out the drums on Nobody's Fault But Mine and Misty Mountain Hop.

The video quality is very good, but modern day editing techniques are best suited for short attention spans of a few seconds. Rarely does the shot stay on a single player long enough to appreciate the band members musicianship. However enough detail is provided in the video footage to see the camaraderie between the players , such as Plant and Page, side by side like two old warriors during In My Time of Dyin', Jones grinning with obvious satisfaction at Page during Nobody's Fault But Mine or a beaming Page rubbing Bonham's head when the group takes a bow. Bluray editions feature both lossless DTS-HD Master Audio 5.1 surround mix as well as an uncompressed LPCM 2.0 stereo fold down both at 48k/24bit. The sonic clarity of either mix is rich, although the 5.1 track finds Plant's vocalssomewhat buried in the ambient hall noise and the onslaught from the band. The midrange and low range of the 5.1 track is its most outstanding feature, offering supreme clarity without losing any of the aggressive force of Bonham's drums or Jones' bass. For some listeners there may be too much audience noise, and the dynamic range isn't too wide, since the band tends to favor more high octane material, but when things do quiet down, as in the opening sections of "Stairway to Heaven", there's still a very appealing clarity and precision to the audio. Surround sound enthusiasts will find nothing special with the 5.1 mix, which places the band primarily in the center up front, and audience bledning to the rear. The ambience of the hall is very apparent, and taking the sweet spot in your listening room will place you literally in the eighth row center seat at the stadium.

There are several packages available, and the best bet is to get the package that includes the CD and either the Blu-Ray or DVD of the concert film. Of course Bluray is the preferred choice, but be clear that unless you don't want to see the film footage, there is no apparent reason to purchase the Bluray Audio only edition. The mix is reported to be identical to the Bluray video editions which also include the DTS HD Master Audio surround mix, making the BDA non essential. Atlantic records has sadly confused consumers with too many options that are not clearly explained. On the one hand having a CD Digipack versus Bluray case size benefits collectors who prefer certain case designs, however it also leads to much confusion.

With 16 classic Led Zeppelin songs spanning their career, this is a must have for fans of the top shelf blues based band from the 70's. Highly recommended and a true reminder that even guys who are nearly seniors can still Rock 'n' Roll.

CD and Bluray or CD and DVD-Audio.  Also available on Vinyl.