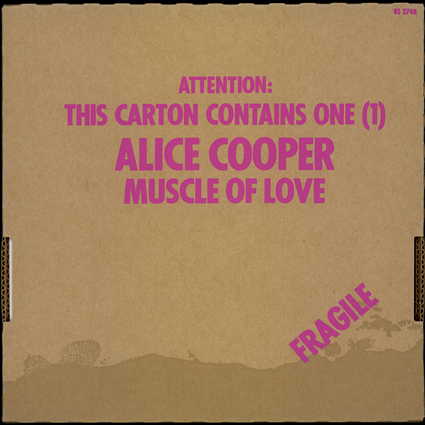 Steve Hoffman and Stephen Marsh have remastered both a stereo and quad layer for SACD of the seventh album “Muscle of Love” from rock veteran Alice Cooper. This was his final record to feature the entire original band, pulling out no stops, making this 1973 release a grand finale. The best tracks are certainly the most well known including the rollicking title track, plus the Top 20 anthem “Teenage Lament '74,” featuring Liza Minnelli, Ronnie Spector, Labelle and the Pointer Sisters on backing vocals. Returning to a simple basic rock sound, the album climbed to #10 on the Billboard 200 charts.

Unfortunately, the controversial album title and artwork caused issues in various countries such as South Africa where authorities intercepted the album and removed the inserts of the ‘nude wrestling’ emporium before allowing them to be sent to record shops. Also label management in North America had to negotiate with a number of retailers to carry the album, however the Muscle of Love cardboard box and ‘water stain’ packaging still presented issues in certain places. So forget about the sound, maybe you’ll just want this disc for the included miniature replica of the Institute of Nude Wrestling book cover, which includes the nude wrestling insert, plus sleeve pics with the booklet, although the lyrics are missing. More likely though, you’ll want it for both.

The quad layer of the Audio Fidelity SACD serves up plenty of zest with gritty guitars, punchy horns, and a brightly balanced mix. The four corner separation is excellent, with wonderful use of the quad soundstage. The Alice Cooper Group has added some sweet layering, which includes riffing and rhythmic guitar parts placed in the rear channels.

Don’t expect an all out rockin’ album, as there are hints of Dixieland and ballots tossed in among the rockers. Crazy Little Child opens with acoustic piano in the rear channels and Alice’s vocals reverberating from the front. There is a real club performance aural feel which gives the horns and guitars plenty of space as they reverberate between the front and back channels.

The title track Muscle of Love starts with a sizzling guitar riff from the rear left channel, which is quickly answered with bass and drums centered up front and an alternate guitar from the rear right channel. This straight forward triangle use of the quad stage is only added to with vocals yet effectively provides for a fantastic surround feel.

While I find it hard to get over the lack of warmth on the quad layer, the immersive mixes make up for this shortcoming. Like previous tracks Teenage Lament '74 makes excellent use of all four channels with backing vocals placed in the rear along with guitar parts and delays that provide space for the main vocals.

The stereo layer is tonally a bit better when compare to the quad, however it is squashed a bit, somewhat constrained by the limitation of two channel audio. Regardless of my complaints, these mixes cut through, they are not muddled, and likely created specifically this way to punch into the listeners space.

Recommended only for fans of Alice Cooper and quad collectors who must have it all. Don’t expect to use this as a demo disc, and you may even want to put cotton in your ears.