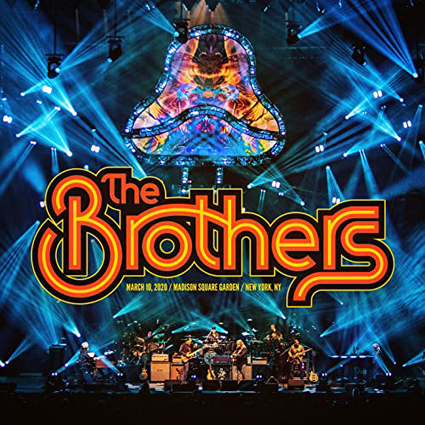 Just as the pandemic was roaring across America, surviving and alumni members of the Allman Brothers Band celebrated the legendary groups 50th anniversary. This one-time concert at Madison Square Garden in New York City on March 10, 2020, has been recorded in HD video and offers both a high resolution 48kHz / 24-bitg LPCM stereo and Dolby True HD 5.1 audio track.

This concert notably marked the first time in over five years that these musicians were on stage together performing their iconic hits, and the first time since the passing of founding members Gregg Allman and Butch Trucks. For those who were there and those who weren’t, the emotionally charged night strongly hits with vigor and passion that now is only a press of a button away on your Blu-ray player.

I am sure that with the looming Corona virus there were plenty of fans who bought a ticket and had second thoughts, but fear not, the complete concert is now available on both CD and Blu-Ray. This is one of the fastest loading discs I have encountered, and with very simple options. After selecting the preferred audio track, be it stereo or surround, the entire concert begins to play without delay.

This is a full on concert experience, presented from the perspective of sitting close to the stage with the ambiance of the audience and reflections of the wall of sound pouring from the front three channels added into the rears. I am not much of a critic when it comes to video, but I like the way it is shot, and find that the black levels are deep, and lighting is vivid. It looks clear and offers many angles, plus distant shots of the entire stage, giving me a real feeling of actually sitting in this massive venue in NYC.

For those who have experienced a live show at MSG, the sound is often boomy with splashy reflections from the side and back of the stadium. Sometimes the concerts I have experienced there have been so reflective that it is difficult to understand the song lyrics, plus the bass can create standing waves that literally shake the foundation. I mention all of this to note that this is effectively not present on these fine recordings. Of course, there is some splashiness on the drums and vocals, but that only lends to a wonderfully live feel to the overall mix.

The great news is live concert recording has come a very long way since the Woodstock days, and The Brothers at Madison Square Garden is a true testament to these dramatic improvements made over the past decades. Each part is distinct and sizzling with energy. The soaring and riffing sounds of the dueling guitars is absolutely phenomenal, easily giving the sense of actually sitting in your concert seat with both Warren Haynes and Derek Trucks right in front of you. Oteil Burbridge’s bass digs down really deeply, grinding into the earth, shaking the ground when push to concert volumes. I found Duane Trucks’ and Jamoe’s drums to be very present and lively and nicely placed within the mix. The Hammond B3 organ and electric piano parts played by Reese Wynans and all the various vocals fit snuggly on top of the powerhouse band, and much of this show is a jam band fan dream come true.

As noted, the back channels have been reserved for audience ambience and reflections from the band’s vigorous jamming. The front speakers spread the band across the front left and right channels, with a substantial amount pouring from the center. I can say that a full bandwidth center speaker will yield a much better audio experience given the weight placed there. I am absolutely delighted that a Dolby True HD audio codec was used which has obviously helped showcase the sound quality of the surround mix. Yet, for some audio purists, one may question why the higher sampling rate DTS HD Master Audio codec was not used for the surround sound version. Several reasons could be at play, including the original sampling rate of the digital multi-tracks to the faster speed of decoding the Dolby True HD codec. Yet, even as an audio buff myself, I just don’t sense that the ever so subtle difference would demand the use of the alternate codec.

Across the two sets WHICH features 25 songs, the band performed Statesboro Blues, Revival, No More Trouble, Mountain Jam, Ain't Wasting Time No More, Melissa, In Memory of Elizabeth Reed, Midnight Rider, and Whipping Post, among many others. Here is a preview of “Don’t Keep Me Wonderin’,” originally released on the band’s second album, 1970’s Idlewild South.

With the option of either a stereo or surround codec, listeners can fill their room with this concert that was also originally streamed live on NUGS.net. The stereo mix is as lively as the surround mix, naturally lacking the back speaker depth. Some may find this version to be more congruent, given its wide spread across the two front channels. It is powerful, rich, and falls nicely behind the speakers, giving it a good sense of stage depth. For those with a smaller center channel, the stereo mix may be your preferred version. Either way, this show rocks and explodes with the revelatory power of this legendary jam band. Like an aged wine, I really feel that they have perfected their craft, giving one of the best performances of these classic songs.

For fans of the Allman Brothers, collectors of concert videos, and those who thrive on jam band riffing, The Brothers, March 10, 2020, Madison Square Garden Blu-ray is a must have. For young rockers who are just dipping your toe into this world of classic jams, while you could start back at the beginning, this collection is a fine entry that showcases the talents of true veterans of music.