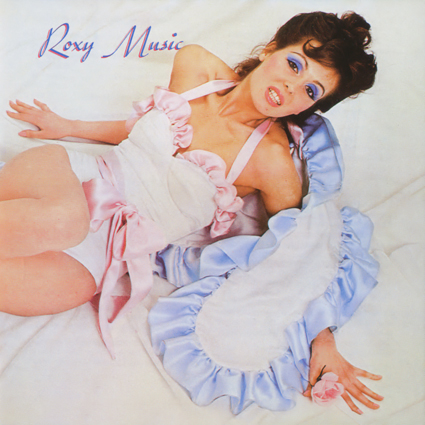 The highly anticipated, long delayed, and disturbingly overpriced super deluxe edition of the debut album from Roxy Music has finally hit the streets. A ton of bad karma has surrounded the lofty price for this box set which features 3 CD’s and a DVD which contains the all new 96kHz / 24-bit multi-channel mix by Steven Wilson.

With a list price just under $190 US, this super deluxe edition initially hit the streets at marginally discounted prices above $160 US which created outrage from the audiophile and surround sound collecting community. Much of this extreme price has been attributed to the 136 page 12″ x 12″ hardcover book which contains notes by journalist and author Richard Williams. This heavy weight book also includes dozens of rare photos, plus many outtakes from the Karl Stoecker cover shot of model Kari-Ann Muller.

While I appreciate the detail of the entire package which apparently took at least five years to create, I buy music for music, not for excesses like this bloated book. I do hope to see a scaled down package, but won’t hold my breath and did pick up a copy when it briefly was selling for less than $80 US.

So, getting past the bad shit, let us talk about why you actually want the super deluxe edition of the eponymous release by Roxy Music!

First and foremost for serious fans, this box set contains rare and previously unavailable material never-heard-before outside of Roxy's inner circle. Plus fans get the original album , BBC Sessions and a concert performance, a demo tape from 1971 and performances noted as “In Session.” For the Hi-Res among us, the DVD includes the original album remixed in 5.1 and available as DTS 96/24 and Dolby AC3 surround sound. However, please note there is no hi-res stereo remix, which is a big dismay to many. But, the DVD contains video of the band performing Ladytron on The Old Grey Whistle Test, along with their first Top Of The Pops appearance doing Virginia Plain and rare footage of Roxy Music at the Bataclan Club in Paris in November 1972.

CD 1 contains the original stereo album. CD2 includes four demos recorded a year earlier, plus outtakes from the actual album sessions. CD3 features two Peel Sessions from January '72 and May '72, along with five tracks for a BBC In Concert broadcast during August later that year. Really, this truly is a packed deluxe edition that boasts hours of listening pleasure.

Now, let’s get back to what prompted me to be interested in this box, of course the new multi-channel mix! It really goes without saying that Steven Wilson is a master of surround remixes, having created some of the best progressive 5.1 mixes to date. While he tends to have a style relating to instrument placement and a sonic pallet that opens up the mix, Wilson has also been extremely creative on Roxy Music with a nod back to the wild quad era.

Roxy Music’s eponymous debut album was recorded on a 16 track machine by audio engineer Andy Hendriksen, which by modern standards is very limiting when it comes to density and depth. Yet Hendriksen accomplished a lot even with this small number of tracks combined with a great band. An now remix engineer Wilson takes listeners on a aural journey that provides a captivating listen in multi-channel surround.

Ambient crowd noise swells from all corners as “Re-Make-Re-Model” opens the album. Bryan Ferry’s commanding vocals cut through from the center channel with backing vocals falling to the rears, all while the band strikes up the art rock energy which stretches across the front channels. A recent addition to the band, Phil Manzanera’s searing guitar work penetrates boldly from the left channel with Andy Mackay adding complementing riffs on Saxophone in the right channel.

Continuing their art rock musical primitivism, which aided in redefining the boundaries of rock, Brian Eno’s synths fade in from the rears on “Ladytron.” The synths go on to take flight around the room as the piece has been extended, providing very tasty ear candy. The surround mixes have been toned down from both my overly bright earlier CD copy and the original album remaster included with this set. The bottom is solid, yet ironically seems to lack some thrust that I hear on the CD versions, plus while I attribute it to design, I felt a lack of analog warmth that I have noticed on other Wilson remixes he has done for other bands such as Yes and Jethro Tull.

Wilson steps outside his customary mixing formula, adding in movement across channels and a deeper use of the back channels, most notably on “The Bob (Medley)” and “Chance Meeting.” The immersive nature of these pieces absolutely changes their palate from the otherwise flat stereo mix, once again making for a compelling reason to listen in surround.

An aspect of remixes like this that I have come to appreciate is their overall clarity and lack of hiss or other unwanted noises. Furthermore, dynamics generally are improved, as is the case here, lending to a listen that truly resembles what the musicians recorded and heard in the studio. Just know that by no means are these perfect replicas of the original mix, thus those who are intimately familiar with Roxy Music will notice subtle differences. In my case I feel that the subtle changes only add to the delivery of this avant-pop release which shimmers with a seductive style from one of the most adventurous rock band of the early '70s.

For musicians and pure fans, the second CD has several early demos that offer dramatically different versions of songs found on their debut release. Since guitarist Phil Manzanera had not yet joined the band, there are distinct stylistic differences played by the former guitarist David O’List. These demos are pretty well recorded which make for a truly fun listen into the start of Roxy Music. Likewise the third CD is chalk full of Peel Session recordings that give another take on the songs from this beloved album.

All in all, the super deluxe edition of Roxy Music is a very worthy purchase, especially for surround sound enthusiasts, fans of the band, and collectors with a passion for art-rock, progressive and even elements of punk. The large format picture book is certainly over indulgent, and clearly has added to the price of this set. I recommend waiting for favorable pricing, which can be found below $80 US, and hitting just below $65 during a brief period on Amazon. Those who are patient may even find better pricing down the road. While we can hope for a stand-alone release, I don’t see that arriving for several years, if at all. Thus, if you want this, pick it up before the limited edition is sold out.