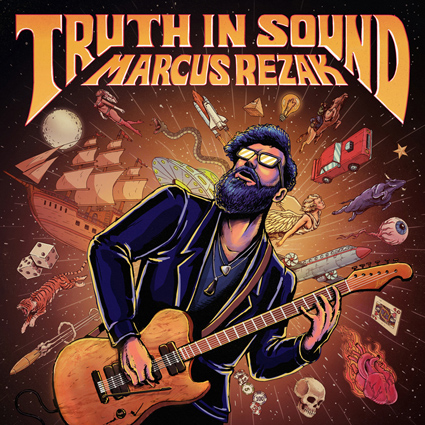 Marcus Rezak is known as a master of improvisational jazz, as both a session guitarist and live performer he has collaborated with a plethora of musicians including David Bowie, Umphreys Mcgee, Primus, the Jerry Garcia Band, The Motet, Melvin Seals, Dopapod, Ratdog, the Disco Biscuits, Lotus, STS9, the Aristocrats, Steve Vai, Megadeth, plus Art Blakey and the Jazz Messengers, among many others. His latest EP release “Truth in Sound” spins off an energetic jam band sound that evokes the ‘70s psychedelic instrumental sound swirled with later day punchy grooves.

His esteemed discography leads back to 2008 when his original progressive rock band from Chicago called the Hue released two albums. Then a couple of years later in 2011, he worked with Digital Tape Machine, which featured Joel Cummins and Kris Myers from Umphreys McGee, who also went on to released 2 albums together. Rezak became even busier in 2014 when he joined the Stratosphere All-Stars which rotated members within the jam-rock scene including Steve Molitz (Particle / Phil Lesh and Friends), Michael Greenfield (Lotus), David Murphy (STS9), Todd Stoops (RAQ), Hayley Jane, and many more.

On this EP “Truth in Sound,” those looking to rock out to a great jam band sound, Razak delivers the goods that should delight your ears. His high energy polished music is reminiscent yet modern, with an invigorating feel that flows with ease. Just like a good bud being passed around, I was turned onto his music by a friend, and immediately astounded by his virtuosic guitar playing. I could hear glimpses of Phish, Garcia, and Umphrey’s McGee, along with a number of other stratospheric guitar players, leading me directly into the jam band world.

The mix is well balanced as the light an airy opening track “Light Of The Moon” dances in with a chunky guitar with an organ following in just before the balance of the band picks up the stride. While the overall sound is classic, I dig the touches of modern tech from the synths and guitar that create spatial zone tones.
Even with the well-produced and pop edge sounding piece “Leaving” audiophiles will appreciate the subtle details layered across the four tracks. From slicing rhythm guitar work to the driving organ, frisky bass, and hard hitting drums, the arrangements continue to grab my attention and carry me forward with pure excitement.

The closing instrumental track “Glitter Pillow” is a masterful ‘70s fusion groove vibe that reminds me of the two back to back instrumental studio albums Jeff Beck released in that era (Blow by Blow and Wired). Rezak has dangled some fantastic melodic hooks and shredded guitar solos across the track, adding tunnel variations on his guitar work. The backing band features bassist Tony Markellis, drummer Russ Lawton, and keyboardist Ray Paczkowski from the Trey Anastasio Band, plus Kalyan Pathak on world percussion, all joining together to invigorate the music.

Rezak wrote, recorded, and produced the album with the hopes the power to heal through music, it is available on CD, Vinyl, and as a digital download. This EP is a must have for fans of jam bands and listeners who seek out amazing guitar work, plus anyone who wants to have fun and simply shake it up.