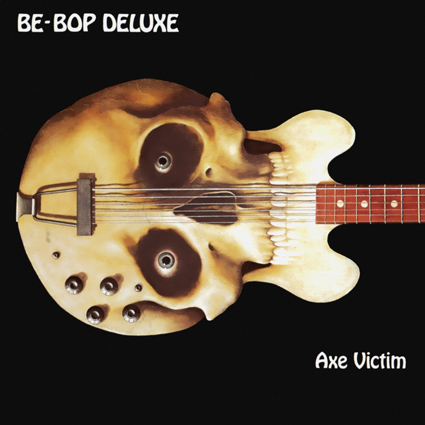 During the mid-70’s diverse pop era ranging in styles from progressive rock to folk, from R&B to disco, and even the power driven leading days of punk and trendy glam rock, Be-Bop Deluxe surfaced with their debut release “Axe Victim” in 1974. The original band comprised of Bill Nelson and Ian Parkin on guitars, Robert Bryan on bass, and Nicholas Chatterton-Dew on drums. Taking on a bit of a David Bowie look, the band turned up on the back cover in heavy makeup, adding stylistic flair to Nelson's confident tenor vocals and the group’s up tempo art rock songs. Additionally, Nelson’s unusual lyrical guitar playing are often emphasized by his jazzy and even sometimes metal-ish excursions, which go on to take the band in a variety of directions.

Now, some 46 years later, audio engineer Stephen W Tayler has remixed this classic album in both 96kHz / 24-bit 2.0 stereo and 48kHz/ 24-bit 5.1 surround from the original master tapes. These new mixes are found in a deluxe box set that contains 3 CD’s and a DVD, along with A 68 page book with many previously unseen photographs and an essay of recollections by Bill Nelson. The limited edition set also contains previously unreleased BBC sessions from 1973 and 1974, including the lost John Peel session from November 1973, plus both sides of the rare Smile Records single ‘Teenage Archangel’ and ‘Jets at Dawn,’ released by the band in 1973 prior to being signed to EMI. Also, fans will find the previously unreleased audition session for Decca Records from December 1973, and previously unreleased out-takes from the original album sessions, all of this and more can be heard across the three compact discs.

Listening to the original stereo mix and comparing it to the new stereo mix is something of a revelation. While the remix does Axe Victim full justice by increasing the dynamic range, transparency, and overall clarity, one can owe that to the original production, right down to the expansive openness of Darkness (L’Immoraliste), which included Andrew Powell’s tasteful orchestral arrangement. The audio engineers team included John Leckie, who in his long career would go on to produce many albums, including subsequent releases by Be-Bop Deluxe.

But let us talk about the surround mix, which is likely the reason you are reading this article. I must first say that the DVD contains both a DTS 5.1 and Dolby Digital AC3 version, each at 48kHz / 24-bit. As I am sure you know, the Dolby AC3 codec highly compresses the audio, and rarely sounds anywhere near as good as the DTS codec. This holds true here, yet there is a caveat to consider. The Dolby version seems to have a bump in the mid-range and the back channels appear to be slightly louder when compared to the DTS version. In fact, the difference is so stark, that one may even think they are listening to an entirely different mix. It seems that the Dolby offers a slightly improved immersive experience for surround sound enthusiasts, and ironically may end up becoming your preferred version.

Because I prefer sound quality, I still rather listen to the DTS 5.1, thus that is what I will talk about here. Sadly, audio engineer Steven W. Taylor unfortunately has stuck with his front centric mixing style. However, there are numerous places where the rear channels fire with discrete elements such as guitars, backing vocals, and orchestration. Typically, the rears have been relegated to reflections, which absolutely aids in opening up the mix, giving Axe Victim a whole new life.

For immersionists there are some really awesome standout moments across the surround mixes, including the swirling echo of the guitar riffs that bubble from the back on “Love Is Swift Arrows.” I also like the tingly acoustic guitar that trickles out of the back right channel on “Jet Silver & The Dolls Of Venus,” along with the backing vocals which fill the room from the rears. Similarly, “Night Creatures” mirrors the instrument placement of the aforementioned with the drums and bass centered up front and electric guitars split across the left and right front channels, broadening their sound with an immense roundness. I am sure listeners will find other cool discrete surround elements, such as the decaying echo of the vocals in the back channels on “Jets at Dawn,” and it is best to leave those discoveries up to you!

Overall sound quality is good, with a bit of an overall push in the mid-range. There are moments when I feel a little left out on the bottom, yet this is somewhat characteristic of many recordings from that era. The thuddy kick drum does not live up to the snappy snare and cymbals, but the dynamics absolutely bring in some nice punch on the new mix. The addition of four alternate takes mixed in surround also are a fantastic plus to this hi-res release.

Comparing the 96kHz / 24-bit original stereo mix to the new stereo mix is a pure revelations. The channel separation is vastly improved, and the top end is markedly brighter, maybe even too much for some listeners. The balance between vocals and instruments has also been improved, allowing the lead vocals to tuck into the music rather than soar overtop the band. The bad thing is obvious, for those who know the album well, these mixing changes will likely seem drastic For newbies like myself, I clearly favor the 2020 mix.

As noted above, the set contains outtakes and BBC session material across the second and third CD’s. For deep dive listeners these discs should not be missed and truly add value to this reasonably price limited edition deluxe set.

Be-Bop Deluxe devotees should certainly know how wonderful this celebration of the band’s debut album is, and there should be no reason collectors would want to miss adding Axe Victim into their library. For art rock lovers and even progressive rock fans, the album is truly worthy of your ears, especially with all of the bonus material. On the other hand, I can not say get this release purely for the surround sound mix, as it is good, but not great nor amazing. Yet, as a collector of surround, I am very happy to add it into my library, and although it is not a complete immersionist mix, I find it to be tastefully done with enough ear candy to satisfy my 5.1 desires.