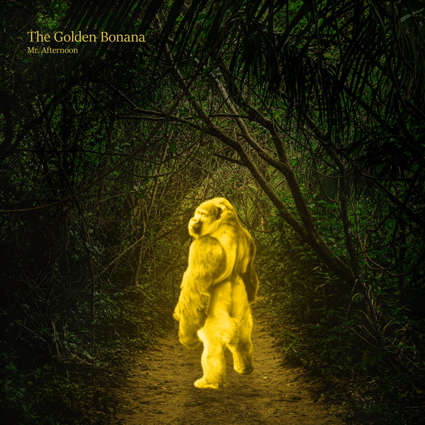 Take a seat by the campfire with the safety of the friendly yellow gorilla orchestrating a journey for you out into the wilderness. The mysterious man behind the second project from Mr. Afternoon could be akin to the Wizard in Oz, instead in this case spinning off the story of “The Golden Bonana” through musical adventure. The immediately compelling aspect to this release is the limited edition surround mix that is found on the sold out CD + DVD set, and now available as a second run on a hybrid-SACD.

I had a chance to catch up with Mr. Afternoon recently during which he answered several questions, including some from fans. As an avid listener of surround sound music himself, Mr. Afternoon conceived The Golden Bonana as a 5.1 project from its inception. He also used a couple of systems to compare and contrast the balance and placement of parts. Furthermore, Mr. Afternoon found that due to the many layers, a completely separate stereo mix was needed, versus simply folding down the surround mix with some minor balance adjustments. He also noted that changes to reverb texture and balance were necessary to fit the format, and even checked out how it would all sound on headphones for those who prefer that listening method.

Using Adobe Audition for mixing and mastering, Mr. Afternoon created download files in both stereo and surround at 48kHz / 24-bit that are available at the links below. When considering the second run, Mr. Afternoon has opted to utilize SACD given its ability to have a standard CD layer while also supporting a DSD 5.1 and 2.0 layer. He explains that the simplicity of a single disc is very appealing and notes that there are many surround enthusiasts worldwide with older players that support SACD. He went on to share that a minor update to the mix will be included on the second edition and will be available as a download for those who already purchased the CD+DVD limited edition set.

Digging into the album, the music is a blend between ambient and light fusion jazz. Mr. Afternoon says he creates his own sound without any direct musical influences and uses a layered approach to develop his unique style. He goes on to say that he listens to the current trends and tries to do nearly the opposite while blending multiple genres together.

The album starts with “An Introductory Passage” featuring environmental sounds emanating across the back speakers. Crickets chirp softly alongside an alien like clicking sound that was created using a processed monkey wrench that is accented in the back right corner. The bass and melody fade in upfront and quiet keyboard pads fall in from the rears while the drums patter along building the rhythm to “Sunrise,” the second part of the jazz infused opening track which immerses the listener.

The downbeat dream style jazz infused music continues on the next track “Optical Hunting” underpinned by a pulsating base line that rhythmically bounces between the back right and left channels. Mr. Afternoon makes great use of the surroundscape with keyboard melodies taking residence in the front right channel and the chordal keyboard pads emanating from the back left while a closed hi-hat ticks out the rhythm in the front left speaker, all nicely filling out the room with a balanced surround mix.

There is just a little hint leading listeners into the smooth jazz realm on “Spiritual Contemplation” which boasts a synthesized horn part laden in a beautifully rich reverb that expands across the soundscape. Mr. Afternoon makes good use of dynamic layering that is assembled around the sweet spot and placed in all corners of the room. I find this to be a perfect mellow listening experience that does wade its way through the jungle guided by the yellow gorilla.

The fifth track “A Break in the Movement” brings back the environmental sounds spreading from the left front speaker across to the rear right speaker. I sense a marching like sound to the melody played on what could easily be bells and there are moments when the music feels much like a stripped down version of Mike Oldfield’s work, which is so keen especially knowing that Mr. Afternoon has also played every part on this release.

The final official track “The Golden Bonana,” on this album of the same name, has the most ambient of sounds featuring slow synth parts that gently bathe the listener from all directions. I especially like how much of the energy falls to the back speakers, allowing me to gently lean back and just enjoy the resonant swirling beats.

Reader Richard asks Mr. Afternoon about his surround engineer influences, and he responded by immediately pointing to multi-Grammy award winning audio engineer Elliot Scheiner. Yet, like any creative artist, Mr. Afternoon noted he may have done some things differently on some of the mixes, such as his own preference for placing instruments in less common locations, such as his example of possibly moving the bass guitar into the rear speakers.

The CD + DVD limited edition also contains a stereo mix, which maintains the same pleasurable balance and sound quality. However, I found the immersive nature of the multi-channel 5.1 mix to be a more compelling listen with its all-encompassing nature. This edition also includes commentary about each of the tracks describing how the song was developed. Plus, there is a set of ‘brainstreams’ and demos, some of which have been both mixed in stereo and surround.

The Golden Bonana is a desirable release for fans of ambient jazz influenced music and immersive audio fanatics that seek well rounded 5.1 mixes. It is available for download at the links below and is also sold as a hybrid multi-channel DSD 64 SACD through the artists’ BandCamp page.