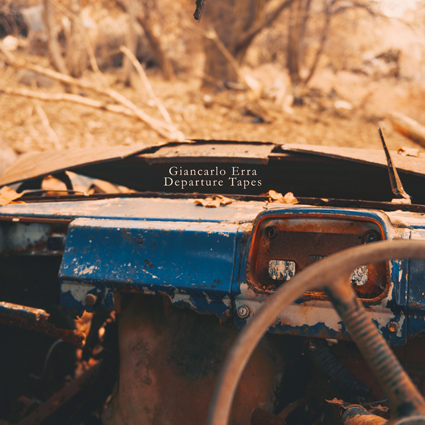 Italian composer, multi-instrumentalist and visual artist, Giancarlo Erra, started his career in 2005 with his one man studio project Nosound. After releasing a slew of albums under the Nosound name, Erra subsequently released “Ends” in 2019, the first album under his own name. Two years on, and he now returns with “Departure Tapes,” reflecting what has been a difficult year with the loss of his father to cancer. In Erra's own words "The end result is the most experimental (and darkest at times) material I ever wrote, without compromise or set plan. It contains all the elements of my music in a very unconscious free flow way. It's the first album I wrote without knowing I was writing it, intrinsically linked to one of the hardest and yet more healing parts of my life. "

Written while travelling between his homebased of the UK and his heritage country of Italy, Departure Tapes is an album of contemplative recordings. Since the vast majority of the songs were recorded live by Erra in his studio, they are totally unique and hold a sincerity which cannot be replicated, offering a depth that is truly original. Erra employed his analog synthesizers, piano, computer, sequencers, even AI algorithms to improvise over, blending them together as they were all recorded live.

Erra further comments, “Of all the albums I wrote in my career across my projects, Departure Tapes is arguably the most deeply personal I ever did. And the one that was at the same time the most difficult and the most easy to come out.” During his travels and visits with his father, Erra always had his OP1 or his computer on which to process all his feelings. For Erra these emotions come out in music, and in streams of consciousness he wrote the songs to the Departure Tapes, saving sounds, chords, all expression of the situation that was tearing himself apart, yet divided between the joy of recovering his relationship with his father and the pain of knowing it was going to end soon.

CD + DVD-A with 48kHz / 24-bit stereo and surround in DTS, Dolby AC3, and LPCM.  Also available on 200g Vinyl, and through streaming services.