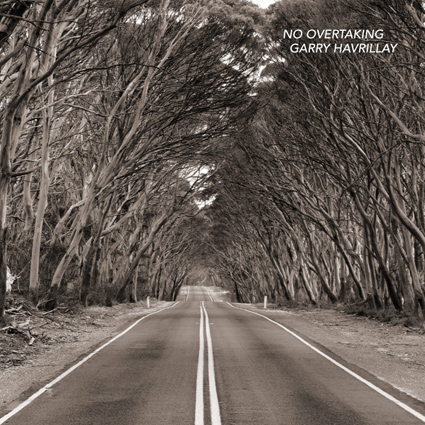 On his 2021 release, Garry Havrillay finds himself escaping the Covid-19 lockdown as he travels through a wide-ranging and conceptually cinematic set of five songs on the album “No Overtaking.” Performances, recordings, and production of this entirely instrumental album have been born out of the need to find comfort through music that aids listeners imaginations to travel. Crossing multiple genres and styles fans will be met with incredible diversity on the six-part feature track “Travelling Without Moving,” with include influences ranging from jazz noir to reggae, gamelan, Indian drone, and African percussion, plus a guest performance from flautist Howlin' Wind.

For high resolution and surround enthusiasts, No Overtaking has been released as an immersive 5.1 96kHz / 24-bit surround edition on either a Blu-ray or as a FLAC download. The Blu-ray also includes a hi-res lossless stereo mix.. Havrillay continues to record and mix excellent sounding albums that engage and easily rank as some of the best surround mixes on the planet. He finds ways to discreetly separate parts across the soundstage, which in turn completely immerses the listener.

On the opening track “Catch Up,” one will notice a call and response between the melodic parts playfully jangling across the front channels and rhythmic parts placed in the back speakers. He masterfully blends acoustic and electronic elements, sonically describing the music in a way that goes far beyond the stylistic sounds of world music. There is a joyous yet trance invoking atmosphere that engages the listener with immensely deep bass and light and airy acoustic strings that vibrantly add their melodies. Rhythms strikingly beat along with pure realism, emphasized by awesome electronic effects that give way two a distinct richness, which are all enhanced by the high-resolution recording.

Venturing into the second song “By the Way,” one will hear polyrhythms beating to their own times that lead into sizzling guitar tones that swell out into the distance. The vast channel separation seemingly takes the music beyond the four walls of the listening room, all while fully bathing the listener with its aural scape. Dynamics are very impressive and become clearly emphasize between the quiet and louder segments of this track, which is augmented by the striking snare drum that literally appears to be right in the listening space. I especially dig how my attention is refocused as the organ swells from the back channels, all while the rhythm continues percolating across the front speakers.

For those familiar with Havrillay’s previous works, they already know that he is not planted in one genre. As mentioned above, this lack of style pigeon holing becomes very evident by the third track “Travelling Without Moving.” This 22 minute six-part song opens with a rhythmic ambient space that is driven by tingling keyboard parts that aim to describe Back Streets, with a light wind swirling in the rears. But do not plan on staying here too long, as the journey continues onto an Island with its reggae beats and tooting horns. Simmering down bells circle the room chiming and clanging as the bass grinds in for the Procession which is followed by an Arabian African segment that slowly gains speed with a tribal beat to accompany the Elephant walking. Check out the delay that move from the front to the back right channel, onward to the back left channels, building space with their slow timely decay.

As a huge Tangerine Dream fan, “2 Mile Tether” has quickly become my favorite song on No Overtaking. Synthesizers are abundant with cascading parts that smoothly open and close the sonic envelope, extending the dynamic swells while percolating around the room. I find this piece to be another testament to high resolution audio which is demonstrated by the punch that brings life to the instruments in a way that truly is unmatched in the standard resolution and vinyl realm. Specifically, it is the wide dynamics that are afforded by hi-res digital audio in 24-bit and beyond. These codecs can easily reproduce every nuance, and Havrillay has recorded each part with crystal clear clarity and masterfully mixed all the parts together, blending them perfectly wherein each element stands out without stepping on anything else.

The fifth and final track “The Glass Boat” sends the listener drifting on a tranquil body of water, moving across a space that is a perfect cooling off which culminates the album. For fans of Brian Eno and Robert Fripp, or even modern-day Markus Reuter, this song will take you back to your heart and home. The immersive nature of the album never lets up, making No Overtaking a hugely impressive listening experience.

For stereophiles, Havrillay has included a high resolution 96kHz / 24-bit PCM mix on the Blu-ray edition. Naturally it is flattened to the front speakers, yet sonically the same as the surround version. Imaging is stellar and the depth of the mix is fantastic, especially due to the incredible transparency of the mix. Havrillay describes that the stereo mix is an exact downmix of the 5.1 mix, apart from some slight differences in the stereo mastering. He also mentions that he considers stereo image placement when first creating the surround mix. Additionally, he works between two completely different 5.1 setups, cross-referencing between them. The first has 4 Matching Sonus Faber speakers with a Polk Audio center channel and a VAF bi-amped sub. The second has a set of Tannoy M20 Gold front left and right speakers, accompanied by an Interdyn center channel, and a set of TDL bookshelf surrounds underpinned by a Polk Audio sub. He ALSO uses a small mono PAL radio as a downmix reference, and he comments that this probably is the most critical ingredient when creating the stereo mix. Please note that the hi-res stereo version is only available on the Blu-ray, while the digital stereo download is available as a 44.1kHz / 16-bit file in a variety of formats through BandCamp.

Absolutely recommended for fans of Garry Havrillay, collectors of surround sound music, fans of instrumental pieces, and eclectic music listeners. I consider this a demonstration worthy 5.1 mix and a perfect way to take a trip without leaving ones listening room.