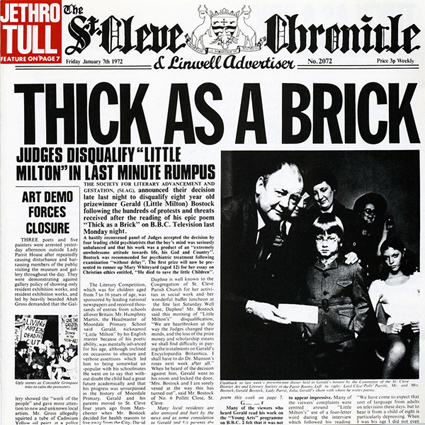 During the height of Jethro Tull's esteemed career, the band’s first progressive epic is a masterpiece, and one of the very few works of its kind that holds up decades later. Band leader Ian Anderson blended hard rock and English folk music, all underpinned with classical music influences, with story filled lyrics so dense with imagery leaving one to pondering their meaning for weeks on end. Audiophiles have often considered the original LP to be one of the best-sounding and best-engineered record Tull has ever released. It easily captures the wide dynamics between the gentle all-acoustic passages and the electric rock crescendos. Reissued in 2013 as a multi-channel surround sound extravaganza as part of Tull’s 40th anniversary series and reprinted in 2023, with some careful packing you can tuck that edition into your treasure chest.

No matter the version, the music is what will count as one waits for rescue from their desert island. With repeated listens, the full story will eventually reveal itself. And, when you return home, pick up Thick as a Brick 2, and even look into an alternate story created by a fantastic Tull tribute band titled Still Thick as a Brick, which is reviewed here on Hi-Res Edition.

A reprint and corrected CD+DVD limited edition with 5.1 mix has been reissued in 2023. Also available on CD Vinyl and Hi-Res stereo download, plus listen on streaming services.