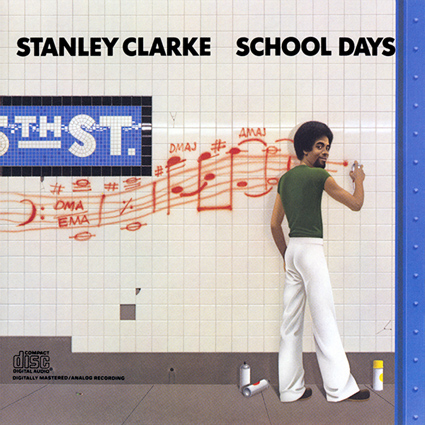 For fusion jazz fans, Miles Davis and Chick Corea blazed a path toward a frenetic pace which began to escalate in 1973 when Stanley Clarke met Chick Corea and formed Return to Forever. As RTF evolved into a more rock-based fusion-jazz group, Clarkes playing moved forward with melodic prominence and flurried solos. When he released School Days in 1976 electric-bass players would wear out the grooves of their vinyl copies trying to learn Clarke's speedy slapped-thumb bass licks. Ultimately, for the rest of us, it was Clarke's compositional skills that made this album so listenable, with the title track contributing a killer riff that has since been added into the canon of the bass vocabulary. He then follows his melodic calling card with more tunes that are even more engaging, stretching the bounds of fusion-jazz, further trading licks with guitarist John McLaughlin and keyboardist David Sancious. It was this point in time that was finding Clarke triumphantly proving that he was able to be both good and commercially successful at the same time. An incredible album that deserves the attention of definitive listeners and a space in any Desert Island Collection.

Available on CD and as a 96kHz / 24-bit lossless download.  Also vinyl lovers may find copies with some searching.