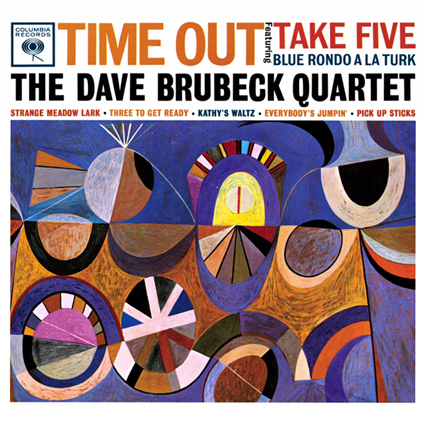 Throughout the 1950's Dave Brubeck enjoyed as much commercial success as any jazz musician could have desired, famous mostly for his experiments with rhythm. Brubeck’s compositions incorporated sophisticated time signatures which intertwined swing with classical references. His obsession with complicated meters, something which compadres saxophonist Paul Desmond and drummer Joe Morello had no trouble complementing. “Time Out” was released in 1959 on Columbia Records, but was initially received poorly by critics, yet pushed up by fans to #2 on the Billboard charts.
Blending Turkish folk and Classical, the album opens with “Blue Rondo à la Turk,” a unique tune that is arty while being very accessible at the same time. Yet, with much thanks to Paul Desmond's composition “Take Five” supported by his sensitive alto sax work blended with Brubeck's plaintive piano solo, this tune remains the one most people associate with the album. Truly Take Five alone deserves its place as one of the greatest jazz masterpieces ever recorded. The mesmerizing song, while so familiar, still sounds fresh with each listen.
Brubeck’s musicology continues with “Kathy's Waltz,” another delightfully cerebral excursion assured to stimulate the old gray matter. Simply put, Time Out contains some of the most memorable tunes in the long history of jazz. While scanning the ocean for a rescue ship, you will be grateful to have included this engaging and hypnotic release in your Desert Island Collection, as trust me it would have been incomplete without it.