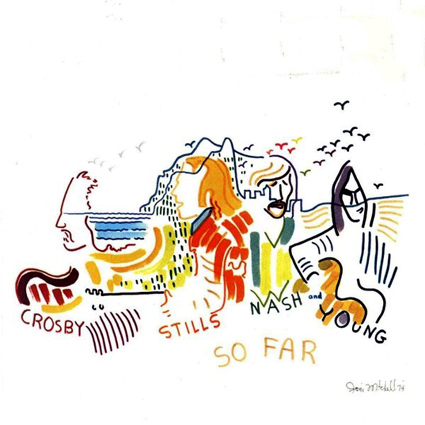 “So Far” became a stopgap album when a new album from Crosby, Stills, Nash & Young fell apart halfway through recording, amid clashes of egos and creative differences , Atlantic records needed something quickly to accompany the reunited quartet's summer 1974 massive stadium tour. Pulling songs from their two in print albums, both the singles “Ohio” and “Find the Cost of Freedom” were included to round out this effectively greatest hits collection. Yet, the album topped the charts and sold hundreds of thousands of copies, all without containing a single new note of music! Still, taken on its own terms, the record is both enjoyable and remains virtually obsolete in the 21st century while including the groups better moments from their two earlier albums “Crosby, Stills & Nash” and “Déjà Vu.” However, it is important to note that both of those releases were two virtually perfect albums, and this distilled down collection may leave some space in your Desert Island Collection for other albums, or you might just want to grab their earliest albums and call it a day. Still want to save the space? It is recommended to pick up the 1994 reissue (Atlantic 82648) which is preferred for sound quality.

Available on CD and with some searching on both Vinyl and Cassette.