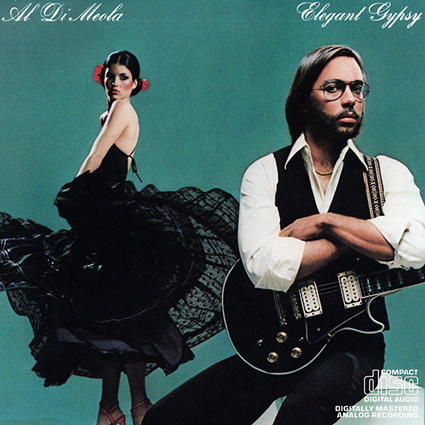 The high octane second album “Elegant Gypsy” from guitarist Al di Meola finds him taking a nod from the band Return to Forever for which he was still a member. An incredibly strong guitarist, this album is exceptionally rock-ish with blazing solos built on the fusion jazz genre. His later recordings became a bit more tempered and mature , but the playing with the like of keyboardist Jan Hammer, electric bassist Anthony Jackson, and drummer Lenny White, along with percussionist Mingo Lewis all who help show off their technical prowess. There are some hints of di Meola’s future direction with the brief “Lady of Rome, Sister of Brazil,” an acoustic guitar solo, plus “Mediterranean Sundance,” which is an acoustic duet with fellow guitarist Paco de Lucía. The release is so high energy that it is a perfect addition to your Desert Island Collection. However, you’ll probably also want to pick up his following albums “Casino” and “Splendido Hotel” too.

Limited availability on CD and Vinyl.